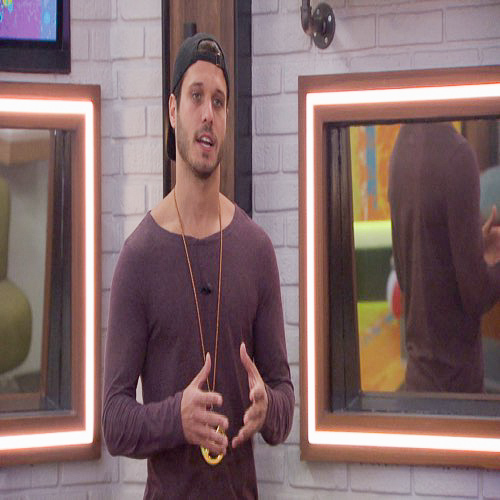 Tonight on CBS Big Brother 22 airs with an all-new Thursday, October 8, 2020, episode and we have your Big Brother 22 recap below! On tonight’s Big Brother season 22 episode 28 “Live Eviction” as per the CBS synopsis, “Tonight Last week it is the live eviction.  In last night’s episode, Cody won the PoV and he decided not to use it.  Therefore, Christmas and Kevin are still on the block, and one of them will be sent home tonight.”

Its day 65 in the Big Brother house and the aftershocks of Tyler and Christmas trying to take out Nicole are still being felt. There are six players left in the game and the final two deals all around. Cody was leaning towards Tyler going home because he is a strong player. Tyler knows their best move would be to get rid of him, but he is going to campaign hard to stay in the house. On the other hand, Christmas has spent three months in that house and there is no way she is going out with six left in the house. Enzo doesn’t like how happy

Christmas is acting in the house, she is thrilled that Tyler is on the block, but she doesn’t have to openly show it. Tyler asks Memphis if he is leaning towards voting him out, he says yes, because he is a beast in this game. Tyler then speaks to Cody and tells him that Memphis is going to vote him out because he is afraid of him. Tyler says if Memphis and Christmas stay in the house, then he is gone – they are a power alliance. Tyler says him staying is in their best interest. Cody is not 100% what he is going to do but he tells Tyler what he wants to hear, that he is keeping him.

Memphis tells Cody that he thinks Christmas is losing it. Memphis wants her to stay but he doesn’t want it to be obvious. Cody says that Christmas is a little frantic. But Tyler, he is a comp beast, so it is tough not to vote him out. Memphis tells Cody that if he wins HoH next time, he will put up Christmas. Every time Memphis speaks to Cody about Christmas, Cody knows that he is lying and has a final three Wise Guys deal with her.

Memphis tells Enzo the game is theirs for the taking. In Enzo’s head, the Wise Guys alliance is not a real thing, but it doesn’t hurt getting as much information as possible from Memphis to help his game. Enzo runs to Cody and tells him about his conversation with Memphis, who said that if he wins HoH he is putting up Nicole, he wants her bad. Just as Cody expected, Memphis is trying to pull a fast one. Cody tells Enzo that he wouldn’t be surprised if Memphis came after him. Enzo says that Memphis’ final two deal has to be with Christmas, he knows she will take him to the end. Enzo says if Christmas stays it means trouble for them. Cody is irritated and Memphis doesn’t realize how easy he can make Christmas go home.

Meanwhile, in the jury house, the surprises are just getting started. Ian is playing pool and naming the turtles in the lake – he is lonely. He guesses that David was going to join him, but it is DaVonne. She tells him that there are layers upon layers of people in various alliances. Da’Vonne thinks Dani is the best player and running things inside right now. Then she tells him that Nicole flipped her vote and sent her home. Da’Vonne is struggling that Nicole didn’t tell her the truth about the vote, Janelle was right. The two are enjoying drinks, they think Kevin is next and they are right. Kevin wasn’t sad to be evicted, it felt like a weight had been taken off his shoulders.

Then, David walks in and they find out it was a double eviction. David tells them that there is probably someone behind him, a triple eviction. Dani arrives and everyone is surprised. She brings a video for them all to watch, they see David take the 10k. He says he didn’t feel safe, so he took the money. Dani says if he would have won the Veto, Christmas would have maybe have gone home. Ian doesn’t blame him, he would have done the same thing. Then they watch as Memphis wins, which sends David home.

Tyler then wins and sends Dani home. Da’Vonne says Tyler was waiting for that moment. Da’Vonne is so happy that she was not a part of that triple eviction blood bath, it seems to have hit those that got voted out really hard. Kevin is surprised that Tyler was controlling the whole game. Dani thinks Cody is playing the best game in the house, although she feels betrayed, she is not bitter and hopes he wins.

Time for the live vote and eviction. Enzo is first, he votes to evict Tyler, Nicole for Tyler, Memphis for Tyler. All of the votes are in, with a vote of 3-0, Tyler is evicted from the Big Brother house.

Tyler is with Julie, she asks him why he told them they would regret voting him out. He says he was just trying to scare them, but they voted out the right person for their game. Julie asks why Cody and Enzo didn’t bring him around a bit further, he says he thinks Nicole is Cody’s number one and he wants to sit with her in the end. Julie asks him why he kept fighting for David, he says he was a big fan and he wanted him to do well this season. He was hoping that he would get to a point where David was forced to work with him.

Time for the HoH competition, this competition is called, “Stashing Pumpkins.” On Julie’s go, they must make their way from their start position to their container which is filled with pumpkins. From there, they must transfer the pumpkins across the teeter-totter one at a time to the basket on the other end. But, if any of their pumpkins fall to the ground, or they fall to the ground, they must reset all their pumpkins to the original container and start from the beginning. The first person to complete the competition and ring in wins the HoH.