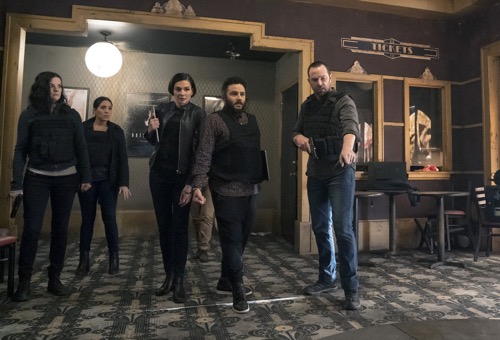 Tonight on NBC Blindspot airs with an all-new Thursday, July 9, 2020, episode, and we have your Blindspot recap below. In tonight’s Blindspot season 5 episode 10 called “Love You To Bits and Bytes” as per the CBS synopsis “As Ivy races to retrieve the devastating stash of ZIP bombs, but the remaining members of the team must rely on the help of a longtime thorn in their side, the very unstable genius Kathy Gustofson.”

The ZIP bombs were still out there. Her lawyer thought he was being smart by turning on Madeline and cozying up to the Dabbur Zann, but they killed him and took the information he had. He gave them the blueprints to all of Madeline’s plans. The terrorist organization now knows every crazy thing Madeline came up and they’re probably going to use it. Dabbur Zann was a threat. They were being led by Ivy and the team was looking for them. The team was also dealing with the repercussions of their actions. They have still wanted criminals after all and they have to answer for everything they did.

The DOD was sending a new director. This director has no connections to the FBI or the team and so she didn’t necessarily have to believe they were the good guys or reinstate them. So, the team was more or less operating on their own. They reinstated themselves and they started working out of the FBI building. The only one that seems to have a problem with this is Rich. Rich and Boston both believed the team should go back on the run. They were criminals who know that the law won’t give them a second chance and so they were wary of what the new director might do. Boston had arranged everything. He got the fake passports and the money. The team just needed to show.

Rich told his team about this plan he came up with Boston. He told them they should run and they wouldn’t listen to him. They believed in doing the right thing and they didn’t think they could do that if they were on the run again. Rich abandoned his plan. He was forced to give up Boston because Boston refused to come back and so Rich was taking a huge chance by listening to his friends. He chose to believe what they believe. They believed in the system and they still believed they were the good guys. Its why they were so set on taking down Ivy. Ivy was a threat as long as the ZIP bombs were out there and so the team went looking for them.

They thought their best bet would be to start with Madeline’s hacker. They found this hacker’s code in all the evidence Madeline had fabricated against Weitz and it led them to Kathy Gustofson. Their old friend/nemesis. She was still kooky and she later showed up at their door. Kathy came to the FBI because she said she wanted to join them. She wanted to join the FBI as a consultant like Rich did and she was willing to help them find the ZIP bombs. Kathy said she liked a little mischief. Only she said she wasn’t evil. She didn’t want to wipe a bunch of memories and so she was prepared to switch sides. And she even had information to offer.

Kathy told Patterson and Rich that Ivy doesn’t have the ZIP bombs. She has a digital key that leads to the ZIP bombs and she needs a hacker to break into Madeline’s server with the key. Kathy had worked with Madeline. She was the one that set up Madeline’s secret server and she built herself a backdoor. Kathy said she could give the team information that led to the ZIP bombs. She wanted a deal first and the team couldn’t offer her that. They instead told her how bad their situation is. They told her they needed to find Ivy in order to get a deal for themselves and so she agreed to help them. She got into the server and she found out someone had gotten there first.

Ivy had gotten herself a new hacker. It was unfortunately Boston. Boston has been taken hostage and the team quickly realized when they spotted his signature in the server. They had hacked their way in. Boston receives a notification and so Ivy received a notification. She demanded that Boston lock them out. He said he couldn’t and she ended up cutting off one of his fingers. Boston later did what she asked. He kicked the other guys off the server and he also dropped a line leading to his location. Patterson working with Rich and Kathy was able to use that line to find Boston. They found him and by then he was on a weight-pressurized bomb.

Boston couldn’t move. He would explode if he stepped off and so the three blind mice were there to help. The computer geniuses helped Boston to hack the bomb. They were walking him through steps to diffuse it when it was triggered and so they had a little under five minutes to hack into it. Kathy took one for the team. She switched places with Boston on the bomb because she said from that position she could stop the bomb. She didn’t tell them until she got on the bomb that there was no stopping the bomb once the countdown started. Kathy switched places with Boston because told Patterson and Rich she was willing to die. And funnily enough, she didn’t.

Kathy said all of that to get them out of the room. She then stopped the bomb by herself and then she made her escape. Kathy escaped custody. She played the team and Rich was proven right about her. He gloated the entire ride in the car. Kathy later called them and she told them that they were delusional if they thought they would be welcomed back to the FBI. She was making her escape because she knew she would never get a deal from the FBI. Her words had been enough for Boston and he asked the team to let him off at the corner because he didn’t want to entrust his freedom to the new guy either.

Speaking of which, the new director showed up at the building. Arla Grigoryan is new to the FBI because she’s never been attached or worked for them before and so she doesn’t know the team. She was therefore worried when she found out they were being used. She asked Afreen to call them off and Afreen did. She called them. She told them they had to come back and the team told Afreen that they couldn’t turn back now. They went ahead with tracking down Ivy. They found her and the rest of her organization. The team got split up as they fought the Dabbur Zann. Jane had accidentally gotten locked in a room when a ZIP bomb went off.

And there’s no telling what Jane will remember after this.