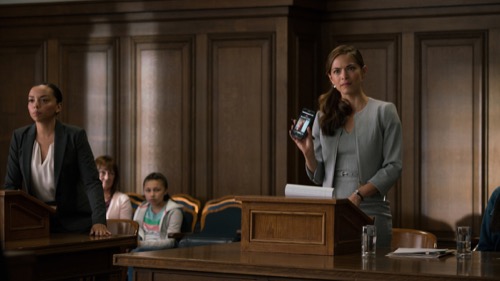 Tonight on the CW their legal drama Burden Of Truth with an all-new Thursday, May 28, 2020, episode and we have your Burden Of Truth recap below. On tonight’s Burden Of Truth season 3 episode 2 called “Wherever You Go” as per the CW synopsis, “Joanna is reeling from the sudden apprehension of Kodie’s children by Millwood Family Services.

So she sets out to win back custody. But in order to win in court, she must conduct a thorough and potentially revealing investigation into her old friend’s life.”

So make sure to stop by tonight between 8 PM and 19 PM ET for our Burden Of Truth recap. While you wait for our recap make sure to check out all our television news, videos, recaps, spoilers, and more, here!

Joanna works on Kodie’s case while Billy fishes. Kodie comes outside. Joanna tells her their hearing is set for tomorrow. We go over who might have called and reported her for child neglect. Joanna offers to drive Kodie to work who doesn’t want to go. Joanna asks Billy to do a sweep of her house while they are gone. Billy asks Joanna if they are just here avoiding their practice’s failure. She owes Kodie and needs to help.

Joanna calls Luna to tell her to get. Revenant files on Joanna at the courthouse. After dropping off Kodie, Joanna runs into Sam who tells her one day he would like to earn her forgiveness. Meanwhile, Owen meets with one of his officers to question him. Kodie had filed a complaint against the officer previously and Owen wants to know if he called in the complaint against Kodie. The officer says no.

At the school, Joanna meets Madison, Kodie’s daughter, to talk about her home life. Back at the house, Billy finds cocaine in the wind chimes. Luna works to get the files but they won’t give them to her. She has to call the office. Help arrives.

Joanna tries to talk to Madison again after getting her a snack. She learns that her aunt Crystal and her mom recently got into a fight. Joanna heads to find Kodie and sees her at Crystal’s. They are arguing. Joanna breaks it up. Crystal mentions Joanna’s father and how he couldn’t keep his hands off the girls in town. Joanna is angry but. Gets them out of there.

Owen and Diane talk. Owen thinks Sam may be behind this all. Back at home, Luna has to defend herself once again, telling Joanna’s employee Pat she is capable of doing her job.

Kodie confesses that Crystal is a hooker for a gang and tried to get her. Daughter involved. Kodie intervened so this must be her payback. She tells Joanna no more secrets. Joanna has a flashback to her childhood, fighting and yelling.

Pat and Luna visit a man who Kodie has a restraining order against. He doesn’t want to talk. They ask if he is the father of Madison. He denies it.

Diane and Joanna talk with Billy about the drugs he found. He thinks Kodie is using. They don’t.

Joanna talks to Kodie who tells her those drugs must have been planted. Billy. He has his doubts.

The next day, Joanna and Billy get ready for the hearing. Billy hides some late bills for their practice. They arrive at court. The court calls a witness, Natalie Cross. Pat and Luna look up information on her. Cross is Madison’s teacher. She shares that Madison comes to school a lot tired, hungry, and bruises. Luna and Pat discover Cross is a lingerie model in her off-hours. Joanna uses this to question her judgment.

Kodie’s ex-husband’s mother arrives. She wants to petition for full custody of the kids. She takes the stand. She shares that her son died of a drug overdose a year and a half ago. Joanna questions how she raised Ryan and also brings her past DUI conviction and drinking issues.

Pat and Luna share a quick drink after the hearing ends. Luna needs to leave soon to find her roommate.

Joanna, Billy, Owen, and Diane head for a drink themselves. They talk about the case and Sam. They get a call to head back to court. The judge shares that drug tests have come back for Kodie and the grandmother. Kodie tested positive for cocaine. The children will be sent to live with their grandmother. Kodie tells the court she is innocent.

Pat and Luna talk. Luna got a little too personal with Madison’s suspected father. Luna hates that her dad denied he was her father. Pat tells her she has come this far without him. They share a moment. Luna heads out to find Taylor.

Billy and Joanna sit by the lake with a fire. They talk. Billy thinks they need to head back. Joanna can’t leave her. Back at their home, Owen and Diane fight over her seeing Sam. Owen leaves in the car to find Sam. Luna arrives home to an empty house. Taylor is still missing. Joanna tells Billy she needs his help. He quotes the Bible, making her laugh than cry when he tells her wherever she goes, he goes.