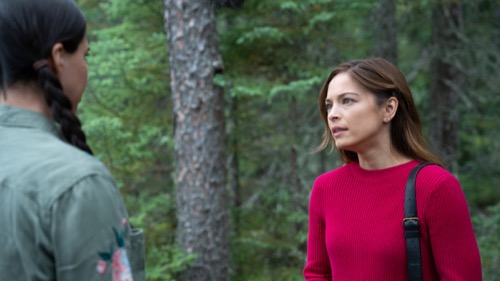 Tonight on the CW their legal drama Burden Of Truth with an all-new Thursday, June 11, 2020, episode and we have your Burden Of Truth recap below. On tonight’s Burden Of Truth season 3 episode 4 called “Desperate Measures” as per the CW synopsis, “Kodie (Sera-Lys McArthur) makes a bold move regarding her children.

Desperate to help her friend, Joanna (Kristin Kreuk) recalls a memory from her past that could be useful to the current case. Meanwhile, Billy (Peter Mooney) meets another mom with a story to tell.”

Madison and True are missing. Billy and Joanna wonder if Cody took them. The police are now involved. Owen tells them Kodie never showed up for work. He hast to put an Amber alert out. Joanna asked him to wait so they can locate the girls. He tells them he’ll give them some time.

Billy and Joanna head to the girls’ home to search for clues. She thinks maybe they went to a camp the family owns. Billy starts knocking on doors will Joanna checks Kodie’s computer. Back at the station, Owen is questioned by his superior about why he isn’t putting out an Amber alert.

Joanna calls Luna for help. On her way to help, Luna runs into Taylor has been missing for days. Billy checks in with his dad to see if he knows anything while Joanna talks to Owen who shares there was a sighting near the grain silos.

Joanna head to the camp. Sam comes into the station with a group of men telling Owen that he is going to go out and search for the kids. Owen is forced to send out an Amber alert. Meanwhile, Kodie and the girls are out in the woods walking.

Taylor tells Luna about Geoff and how she followed him. Kodie calls Luna and tells her she needs Joanna, she messed up and now she has made things worse. Luna tells her to keep running. On her way from the law office, Geoff is waiting for Taylor. She runs back inside.

Joanna finds Kodie’s car and walks through a junkyard. She comes to a woman with a gun and Kodie. Kodie agrees to talk to her. Meanwhile, Billy works to get a letter from the girls’ doctor showing True has anxiety and needs to be placed with her older sister.

Sam speaks to the press about Kodie while Kodie resists Joanna’s advice. Joanna tries to get her to listen. Joanna tells her if she is going to run, staying at the camp is a bad idea. Just as they agree she will head to Blood River, Sam and his men are spotted walking towards them. They run.

While Joanna and Kodie run, the woman with the gun stops Sam and his men in their tracks. Sam and the men try to continue walking. The woman fires a warning shot. Sam and the others leave.

Taylor tells Luna that her life hasn’t worked out the way she thought it would. Joanna and Kodie grab the girls and head through the woods. They talk about when they were kids. Kodie shares that when they ran away when they were younger, Joanna’s dad called child services on her mom. Joanna had no idea.

Billy calls and Joanna has to admit she is helping Kodie evade arrest. She asks him to get a case file for her. The one involving her father from years ago.

Joanna forces them to go to Owen. He tells them he can help as much as he can. Kodie is angry. She scares the girls. After seeing them look at her like that, she turns herself in. Owen brings her in.

At home, Billy shares files with Joanna about her case as a kid. She feels bad for herself. He used her running away as an opportunity to make her mom look bad.

The next day, Joanna yells at Luna on the phone about advising Kodie wrong. Meanwhile, Owen receives a complaint from his superior about Sam, who has a black eye. Owen tells his boss he didn’t do it.

In court, Kodie is charged with child abduction, something Joanna didn’t see coming. She tries to get Kodie out on bail. The judge allows for house arrest.