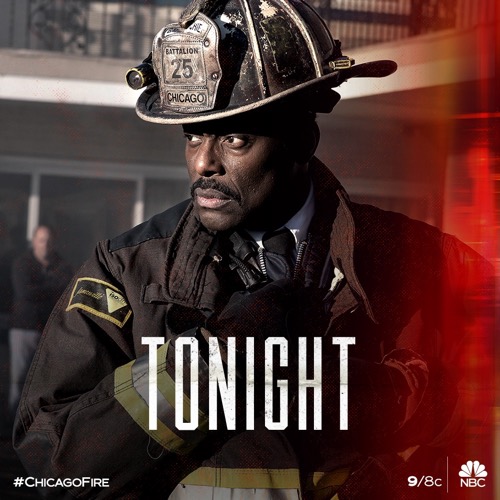 Tonight on NBC Chicago Fire returns with an all-new Wednesday, March 25, 2020, season 8 episode 18 called, “I’ll Cover You,” and we have your Chicago Fire recap below. On tonight’s Chicago Fire season 8 episode 18 as per the NBC synopsis, “Lt. Severide teams up with Seager and the OFI when a motel structure fire turns suspicious. Firehouse 51 members become amateur sleuths following a Reddit post involving one of their own. Brett continues to get invested in her birth mother, Julie.”

Tonight’s Chicago Fire season 8 episode 18 looks like it is going to be great and you won’t want to miss it.   While you’re waiting for our recap make sure to check out all our Chicago Fire recaps, news, spoilers & more, right here!

Brett and Julie are sitting down in the station talking about the baby, Julie says Scott will be there on Friday with the rest of their things.

Stella is at a school with Wendy introducing her Girls on Fire. She calls a girl out for chewing gum loudly and tells her this program can be a good way to channel that energy. This is the third class they have approached and there are no sign-ups, Wendy says they may need a different approach, one that is less intimidating.

Back at the station, Stella tells Kelly about there being no sign-ups and she is worried the program could be pulled.

The alarm goes off, the crew heads to a motel fire. Chief Wallace and Casey give the orders. Casey finds a woman on the floor in one of the rooms, Severide finds a man underwater in the bathtub. Otis gives Severide a hand to carry the man outside the tub and out of the room. Brett checks the man, there is no pulse, they do compressions, but there is no hope.

Back at the station, Casey tells Severide, who is upset that they lost the man in the tub, to focus on the one save.

Brett’s parents are coming into town to see Julie, and she is worried about how she fits in with Scott, Julie, and the baby.

Dan from Milwaukee PD walks into the station, Severide sees him and asks if he can help. It is regarding the victim in the fire, Dan says he was dead before the fire, he is a witness in a case and he guesses someone didn’t want him talking.

In Chief Wallace’s office, Dan shows him and Severide a photo of Anthony Harris, 14 years old. His older brother sucked him into the gang life and a week ago he was shot and killed, a drug deal gone bad. Dan told the victim, William, to check into a motel and wait for him and now he is dead. Dan says he knows Wiliam’s death to be treated like murder, not an arson.

Wendy arrives at the station, she tells Stella thinks they should put up flyers around the neighborhoods, therefore no pressure from school. Wendy hands Stella the whole pile and tells her that she can’t help.

Wendy and Severide head to the motel to try and figure out the cause of the fire.

The alarm goes off, a marriage proposal gone wrong. A man slipped a ring into his girlfriend’s drink and she swallowed it. The woman is in distress and bleeding, she is also losing consciousness. They manage to get the ring out and save the woman.

Casey is busy trying to track down an old case where a photo of him was posted online.

Julie and Sylvie are grabbing a bite together, she tells her that she just wants to be a part of her new family.

Wendy gets the results back for the samples they took from the fire, it was arson. She heads back to the motel with Severide to find that area they had barricaded has been opened up. The janitor comes down the walkway with a hammer and tries to stop Severide, he didn’t recognize him, and though he was breaking in. Wendy tells the man it was murder. The man says he can’t get into trouble, he is on parole.

Acid was used to start the fire, Wallace says it is used to clean medical equipment and the victim was at a medical conference before he went to the motel, he worked for a company called Hollette Industries. Wallace thinks maybe one of the victim’s co-workers are wrapped up in this mess.

Julie is getting contractions, Sylvie tells her it sounds like she is going to have a baby.

Wendy and Severide go to Hollette Industries to ask questions of Mr. Roache. He says this could be all his fault, he asked the victim to take care of Ray, he has been in and out of rehab for quite some time. Severide sees the guy across the hall, and when they lock eyes the guy takes off running. Wendy almost gets hit when Ray is speeding in a car in an underground parking lot. Severide manages to move a garbage container in the path of the car and stops it head-on.

Julie is at the hospital, the contractions are getting worse. Julie is on her way to the delivery room, Sylvie promises to call Scott.

The guy from Casey’s old case shows up at the station, he actually wasn’t looking for Casey, he was looking for another firefighter from a different station that was the heroin that case.

Wendy has her arm in a sling, Stella is with her, the captain is there as well and thankfully Stella’s only recruit brought some friends.

The doctor comes in to see Sylvia, Julie had a placenta eruption, both she and the baby are fine and the doctor will keep her updated. A few minutes later, the doctor returns, the baby’s oxygen was compromised, Julia developed preeclampsia and they did everything they could, she lost a lot of blood, she died on the table. Sylvie tells the doctor that Julia was her mother, the doctor says the baby is doing well. Casey is with her, he tells her to go see the baby. The doctor encourages Sylvie to pick up the little girl.