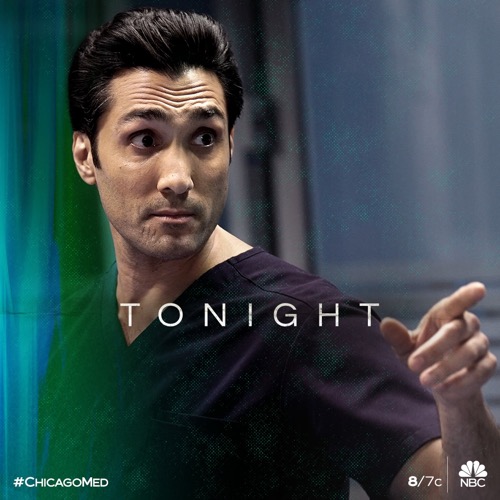 Tonight on NBC their medical drama Chicago Med airs with an all-new Wednesday, April 8, 2020, episode and we have your Chicago Med recap below. In tonight’s Chicago Med season 5 episode 19 called, “Just A River In Egypt,” as per the NBC synopsis, “Dr. Charles evaluates a 15-year-old who is brought into the E.D. after an apparent fall off an overpass. Will sides with Dr. Asher on a risky treatment plan. Tensions run high between Dr. Choi and Dr. Marcel.”

Chicago Med begins tonight with Dr. Will Halstead (Nick Gehlfuss) getting dressed in Dr. Hannah Asher (Jessy Schram) apartment, suggesting if he is going to keep staying there he should keep his own toiletries there. Both agree it has been a great couple of weeks, personally and at work. Meanwhile at Chicago Med, April Sexton (Yaya DaCosta) and Dr. Crockett Marcel (Dominic Rains) are practice some medical procedure when Dr. Ethan Choi (Brian Tee) walks in, but is furious and retracts when he sees them together; causing April to chase him confronting him on why he even cares. Crockett tells April they will finish up later. Dr. Natalie Manning (Torrey DeVitto) walks in and greets Marcel, but they are interrupted when two patients are rushed in.

Ethan’s patient Zach Brand (Griffin Kane) is unable to respond as to where the glass came from but they will figure it out later. Crockett’s patient, Ms. Cross was in a car accident and codes, Ethan rushes over and together they work together. She also has glass on her and Ethan realizes their patients are connected. They do scans and find her spleen in here chest, Marcel immediately wants to bring her into the OR something Ethan doesn’t agree with, but she isn’t his patient.

Sharon Goodwin (S. Epatha Merkerson) meets with Madeline Gastern (Jodi Kingsley) who informs Maggie Lockwood (Marlyne Barrett) that she has found foster parents for Auggie (Christopher Farrar). Maggie is quite happy and goes to see Ben is playing cards with Auggie; learning that Auggie tinks the parents are nice. Ben heads off to work, leaving Maggie to have a look at Auggie who had a belly ache. She wants Natalie to have a look at him, a little concerned.

Ethan checks on Zach and his scans show a simple fracture. He checks his eyes, wondering if he lost his balance but he wants to do this all later. Ethan says he will bring in another doctor to speak to him. Ethan believes he did jump and does tell the police that but he needs a psych consult and asks Marcy to get Dr. Daniel Charles (Oliver Platt).

Will has a patient show is 19 weeks pregnant, and she is bleeding a little bit. The baby is moving and she reveals she has stage 4 brain cancer and this is her last chance to have a baby and the baby will be viable in a few more weeks and she needs them to help her. Will promises to help her telling his assistant to call Dr Asher as she is the best.

Maggie is disappointed that Natalie needs to do a procedure on Auggie who was really hoping to go home with his new family today, but it is a pretty quick recovery and hopefully, he can go home tomorrow. Meanwhile, April is in with Marcel for the procedure, doing a great job; he tells her not to sweat it and they can do it together. April feels like a failure when Crockett needs to take over. Outside of the OR, April tells him he should start training a new nurse because this is because of the whole thing with Ethan and there is no excuse for that. He reminds her she is the best and he isn’t training anyone else. Marcel spots Ethan and walks away

Ethan is introduced to Zach’s parents who are upset that he fell over the overpass, but Dr. Charles is right there with him as he informs them that he is a psychiatrist wanting to get a better sense of what happened and it is a possibility that he jumped. His parents think it is his friends and he got pushed by the homeless guy who lives there. His dad doesn’t think he needs to be interrogated by a shrink and go to see the son. They think they can talk to the mother better than the father.

Sharon’s son, Michael comes to see her revealing he got the job right there at Chicago Med.

Dr. Charles comes to see Zach, who agrees to talk to him. Daniel notices that as he talks, his mother won’t look up as he tells the story of the homeless man. They offer to get him some food and leave the room knowing the parents coached him on what to say to avoid getting arrested but also know putting him on a forced hold is not going to work but they can’t very well release a suicidal kid. Dr. Charles feels a mom loves to see their children get fed, so they will see how that will go.

Dr. Asher says their patient has dilated 1 cm but they may be able to save the pregnancy and can do a risky thing to save it. Halstead is willing to stand by Asher as his assistant is way out of line bringing up the fact that she is a drug addict.

Maggie worries that Auggie is cold and short of breath, Natalie says they are backed up and gives them a call, but Maggie finds out he isn’t on the schedule learning he is denied because of DCFS. Madeline says the State is his legal guardian, who understands and is trying her best but there is nothing else she can do, leaving Maggie and Natalie standing there with no answers.

Maggie chases down to find Dr. James Lanik (Nate Santana ) and tells him about Auggie) wondering if he will write a note; something he refuses to do to cut through the red tape.

Dr. Asher tells her patient that she is now 3 cm dilated, still hoping they can turn this around. Ms. Currie wants them to terminate the pregnancy as it is the safest option in her opinion. The patient is adamant that it cannot happen as she needs to have this baby so her husband can have someone to love as much as she does; then she is okay to die. Will say they will increase her meds and check back in a bit.

Michael and Sharon enjoy their lunch as he asks if Dr. Latham is into anything special; saying he will be working with these guys and would like to establish a repoire with them. In the meantime, Daniel and Ethan return with food for Zach, and they are informed the Brand’s lawyer is there and they cannot speak to him until legal is sorted out. CPD arrives and informs them they couldn’t find the homeless man and it looks like he jumped. Daniel offers to put him on a psych hold and if the driver can confirm he jumped he can guarantee that he can help him that way. The father is determined that his son was not suicidal. The officer says the driver is still unconscious if she wakes up they will question her but until then they have to let her go. Ethan asks the officer to knot let him go yet.

Ethan begs Crockett to wake up his patient, but he refuses to say he just rebuilt her belly and she isn’t there yet. He feels she could die and he is going to do what is best for his patient; Ethan warns him if the boy tries to kill himself again than it is on him.

Auggie begins to crash as Maggie tries to beg him to be brave. Natalie intubates him and they bring him up to get the procedure he needed earlier. Natalie giving Madeline crap saying its an emergency now, there is no need for consent!

Dr. Asher and Halstead are forced to bring their patient into surgery who is more determined than ever to save her baby. Marci wants to save her baby, and the surgery could kill her, her husband pleads with her to terminate the pregnancy but she says she is doing this for her and it is her decision. Currie tells them they are wrong and this is too risky but Will reminds her it is Marci’s decision.

Ethan and Charles talk to Zach’s parents, believing Zach is depressed. Dr. Charles believes there is nothing else they can say unless there is something one of the parents have left out. Ethan runs over to the car driver’s room, and lightens her sedation, waking her up. He wakes her up, asking her if she saw the boy landing on her car. He asks if he got pushed or he jumped. She shakes her head and he asks again. Ethan finds out that he didn’t jump.

Mr. Brand is called back in to call to validate his parking as Dr. Charles talks to the mother about her son being depressed. He gives her his card, saying the last thing she wants is her son to go through this alone.

Auggie got his procedure done with Maggie snapping on Madeline for it taking him bleeding out for him to get it. Will and Asher work hard to save Marci’s pregnancy but the procedure is not going well; he tells her to walk him through it.

Marcel finds Ethan snaps, finding Ethan and the two fight about April. He tells Ethan if it takes him hitting him that does it, and Ethan hit him, knocking him to the floor.

Marci’s pressure drops and she is bleeding out, they need to terminate the pregnancy. They charge and attempt to revive her several times. Dr. Asher calls the time of death and storms out. Dr. Charles finds Ethan informing him that Zach left but his mother took his card. He feels the dad may find it easier to focus his pain elsewhere than deal with the actual problem.

Sharon is happy to learn Auggie is doing better but his foster parents backed out figuring he would be too much. Suddenly Maggie and Ben decide she and Ben want to take him; Sharon informs DCFS. Meanwhile, Will and Hannah inform Marci’s husband what happened as Currie sits with him. Will tells Hannah she made the right decision, but she knows it doesn’t make it any easier. She tells him she needs a meeting and he says he will take her. Currie spots them leaving.

Michael says good night to his mother as James comments on how great of a salesperson he is. Ethan checks on Crockett, who says he will live. Natalie cleans his eye, saying he is making friends everywhere. April comes home to Ethan, confronting him on hitting Crockett. Ethan says it was easy to see him as the problem but he knows the real problem was between them; whatever it is she wants, it isn’t him. He grabs his packed bags and goes to a hotel. He leaves her crying in the apartment.