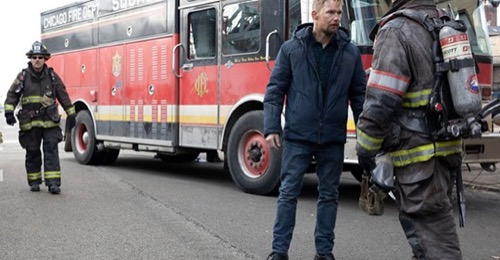 Tonight on NBC their drama Chicago PD returns with an all-new Wednesday, February 26, 2020, season 7 episode 15 called, “Center Mass,” and we have your Chicago PD recap below. On tonight’s Chicago PD season 7 episode 15 as per the NBC synopsis, Part 2 of Crossover with Chicago Fire; Intelligence searches for the dealer who caused multiple overdoses and is connected to Roman’s missing sister.

Roman is back. He came back because his sister Sarah was in trouble. She ran away from home because she got mixed up in the wrong crowd and she could be in danger. She was dating Logan Peters. Peters was a drug dealer and he was currently selling some kind of fake oxy. It was made in Mexico. It was created using fentanyl and was deadlier than the real stuff. Logan was selling this thing on the street. It was killing people and it was growing out of control. The police wanted to stop him and so they linked up with Roman.

Roman was temporarily assigned a position on Intelligence. They partnered him with Burgess and Roman noticed right away that something was off with her. He noticed how everyone was treating her with kid gloves. He tried asking her about it and at first, she told him she merely got worked over on the job. She didn’t reveal her miscarriage until much later. He had tried to express his condolences at the time and Burgess didn’t want to hear it. She was tired of people feeling sorry for her and treating her like a wounded animal. She wanted things to go back to how they were.

No sooner did they try to move past it that both found a lead on Sarah. Some drug dealers had remembered seeing Sarah at a house and so both Roman and Burgess went there. They later searched the building. They found her coat and so they checked nearby. They were looking for her for her when they spotted her corpse. She had frozen to death. She was beaten up and strangled prior to that. It seems her assailant had thought she was dead and so he or she had left her out in the cold where she eventually died.

Roman was the one that had to break the news to his parents. His parents were told how she died a week ago and that meant Roman couldn’t have said her no matter what he did, but his father had lashed out. His father punched and blamed Roman for Sarah’s death because it was easy. It allowed him to be blameless in her death. It had taken Roman’s parents some time to calm down and he stayed with them as Burgess went back to Intelligence to work the case. They had Logan for Sarah’s murder.

Logan’s DNA was found under Sarah’s fingernails. She had fought back before she died and that had been proof enough that Logan had killed her. If he hadn’t assaulted her as she did, she would have been able to climb out of the snow on her own. It was because she was attacked that she was too weak to go back inside and that alone would have saved her life. Sarah was murdered. She was killed by her boyfriend and so Intelligence looked for Logan. They found a possible location for him because they found out which lowlife he hangs around with.

Intelligence went to arrest him, but by the time they got there, Logan was dead and the only other person they found was on OD’ing on drugs. The detectives called a bus for their potential witness if not the shooter. They needed him alive because he was the only one that could tell them what happened at the warehouse. They were waiting to hear back from him when Burgess finally had it out with Ruzek. They were going to have a baby and now they’re not. Burgess was angry with herself and she wanted Ruzek to be angry with her as well.

He wasn’t. He doesn’t blame her for the miscarriage and so he couldn’t give her what she was looking for. Ruzek was just sad. He mourned the loss of the child and he was going to do it his way nor hers. Burgess later dropped it. She also was the one that talked to Roman and she told him that his sister’s murderer was dead. Burgess and Intelligence suspected that it was Logan’s supplier Leon Miller that killed him.

The detectives went looking for Leon Miller. They found him cooking up more drugs and they arrested him. They would later question him about Logan’s murder. They wanted to know why he killed him and Leon surprisingly denied the charges. He confessed to everything else but that. The detectives had found a witness in the area that they hoped would clear up the confusion and instead this witness lied to them. His story about what he was doing didn’t make sense. He claimed he was driving to his sister’s from a location that was out of the way and so Burgess asked Platt to look into the witness.

Platt soon found evidence that their witness used to be a C.I. He used to work for Roman and Roman’s cousin has the same car that was actually shown leaving the scene. The evidence pointed to Roman having killed the man responsible for his sister’s death. Burgess found this evidence and she confronted Roman. She wanted him to tell her the truth. She told him that he was a suspect and he tried to deny what the evidence was telling them. Roman denied killing Logan. He told Burgess it wasn’t him and so she tried to cover for him.

Burgess lied to Voight for Roman. She didn’t tell anyone what she found out about the witness and so they had to find out on their own. They learned the witness was a fake. They were doing their best to trace him because he seems to have vanished into thin air. It led back to Roman. It didn’t take long for Voight to realize that Roman was responsible and he could have arrested him, but he didn’t. Voight chose to bury what they had. He then wished Roman the best and so Roman is a free man.

He got away with murder and not many people can say that.