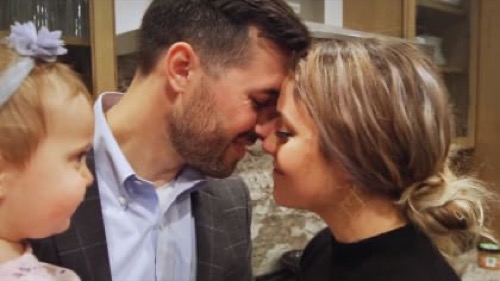 Tonight on TLC their reality show Counting On airs with an all-new Monday, August 18, 2020, season 11 episode 7 and we have your Counting On recap below.  On tonight’s Counting On season 11 episode 7 “Highs and Lows,” as per the TLC synopsis, “Jeremy and Jinger shares the news about their miscarriage; Ben is having second thoughts about his eye surgery; Jeremy prepares a surprise party for Jinger.”

Recently, Jinger and her husband announced to her family she was pregnant. It was very welcomed news. The family was all excited about a new baby and everyone started to talk about it. Like what number was this new baby going to be for their grandparents. Michelle and Jim Bob were especially cheerful because they were glad about a new baby coming into the family but sadly it just wasn’t meant to be. Jinger later began experiencing cramping. She called her mother right away. She turned to her mother for advice and her mother had tried to be optimistic with her. Michelle said she experienced the same thing during one of her many pregnancies.

She added how she had been able to hold onto her baby and so that’s what Michelle wanted for her daughter. She wanted her daughter to come through the cramping safely as well. She stayed in contact with Jinger as Jinger went to the hospital. The young woman went in wanting to believe that she was still okay and unfortunately she wasn’t. She did in fact lose her baby. Jinger suffered a miscarriage. She and her husband were devastated when they were told the news and so there was going to be some healing involved. They were going to need some time as a family to heal. It had helped that they had an older child. Felicity was still young and she hadn’t known what was going on.

So, it was easier for Jinger to just focus on her baby. She was a stay-at-home mother and she spent most of her time with her daughter Felicity even as her husband eventually went back to work. Or at least that’s what she thought he was doing. Her husband had actually been planning a surprise birthday party for Jinger and he decided to go ahead with it after the miscarriage because he wanted to celebrate his wife. She’s been through a lot. She’s had to move several times and its often been away from family and friends. Jinger also needed a reason to smile. Her husband wanted her to be happy and realize how amazing she is. And so he came up with this surprise party.

Jeremy decided to put the party together while his wife was at her photography class. Jinger was big into photography. She loved taking pictures of her family and it’s become a passion project of hers. It’s also helped her to meet new people out in LA. Jinger was quickly making friends there and the photography class itself would put her in a great mood for Jeremy to pull off his latest surprise. Jeremy has always been able to surprise her. He surprised her by being in town once when he wasn’t supposed to be and she hadn’t seen the marriage proposal coming either. Jeremy’s in-laws said he was able to get away with his surprises thus far because Jinger wasn’t a suspicious person.

Jinger was a trusting person. She would never suspect a thing and so that worked out great for Jeremy. Jeremy planned everything in great detail. He was going to go home once he knew Jinger was finished with her photography class and he was going to tell her he was taking her out for dinner. He later told her that he wanted it to be a special night just for the two of them. He even suggested she wear her new dress and so Jinger got dressed up for her surprise party without knowing about the party. It was a very smart thing Jeremy did. He was able to get Jinger to follow in line with his plans without her knowing and it all paid off in the end.

Jinger was surprised when she saw everyone at her party. It was a party honoring her twenty-sixth birthday and that was a little unusual. It would typically be a huge party for a birthday ending in zero or a five and so Jeremy really did put this party together just to honor his wife. He wanted to show her how loved she was. She got to see her siblings, her friends, and her parents. Jinger has been close contact with her mother Michelle since the miscarriage and not once did Michelle ever let on about the party. Her mother kept this secret close to her chest. The siblings were the same way.

Jinger’s siblings all told her about what’s going on in their lives. Jessa’s husband Ben had Lasik surgery and now he no longer needs glasses, but it was a big thing for him. He and his whole family went to the appointment. He was having surgery and Jessa was minding three kids in the lobby. It was quite difficult for her. Her children wanted to run around and she couldn’t allow it. She was basically doing her best to keep them in one place while Ben was getting his surgery. They were both just so happy when it was all over. Ben can now wear whatever sunglasses he likes. He doesn’t rely on prescription and Jessa was happy for him.

Jinger found out about everything her siblings were doing. She just never expected the party and that’s why it was so great for her. Her family came together to celebrate her. They all said kind words at her party about how blessed they’ve been to have her in their lives and Jeremy even revealed a painting he had done of Jinger with their daughter Felicity. And what’s great about the party is that everyone was still in town afterward, so Jinger was finally able to talk face to face with her family about her loss. She was able to talk it through with them and feel supported as she told them about her miscarriage as well as about how she doubted God’s plan.