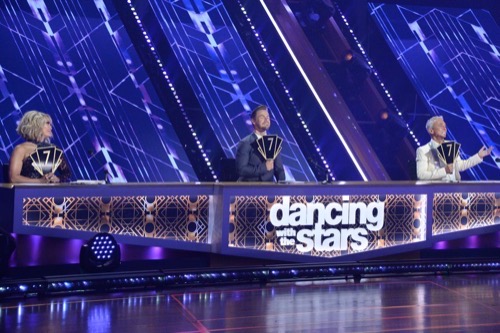 Tonight on ABC the glitz and the glimmer returns to the ballroom as Dancing With The Stars 2020 season 29 episode 4 of DWTS airs! We have your all-new Monday, October 12, 2020, season 29 Episode 5 Dancing With The Stars recap below! On tonight’s DWTS Season 29 episode 5 “80s Night,” as per the ABC synopsis, “The ballroom is rad and tubular for “‘80s Night” when 12 celebrity and pro-dancer couples compete for the fifth week live for the 2020 season.”

Tyra Banks explains that the cards were mixed up last week and caused a blunder, but the right couple ended up going home.

Judges Comments: Derek: “What a great way to open the show you are a maniac and I mean that in the best possible way. So much fun. This is the stage of the competition when it really begins. It is an even playing field for everyone, work hard, and stay focused, we will be paying attention to all the details.” Bruno: “Wet, wild and wonderful. Sasha, can I have the costume back please, that neckline gave me vertigo? This so deliciously 1980’s.” Carrie Ann: “I had high expectations and you totally brought it. You are both in synch, you matched every line perfectly.” Judges Scores: Carrie Ann: 8, Derek: 8, Bruno: 8 = 24/30

Jesse Metcalfe and Sharna Burgess dance the tango to “Everybody Wants to Rule the World” by Tears for Fears.

Judges Comments: Bruno: “You started very well and you went wrong. You kind of lost your timing, it is getting the balance between the performance and the technique. Both have to be at the same level. You lost your steps and timing, I am sorry. Don’t feel discouraged.” Carrie Ann: “I agree with Bruno, but I thought you were much more confident and you were feeling the beat for the first time. We have to celebrate the victory, but you are still just a little disconnected from Sharna. Reconnect and come back.” Derek: “We are rooting for you, we want you all to succeed and improve and have those breakthroughs. You are improving each week, but I didn’t think this was your best dance.” Judges Scores: Carrie Ann: 7, Derek: 6, Bruno: 6 = 19/30

Chrishell Stause and Gleb Savchenko dancing the cha cha to “You Got It (The Right Stuff)” by New Kids on the Block.

Judges Comments: Carrie Ann: “You have all the right stuff, but the wrong stuff for the cha cha. There were so many opportunities to put cha cha in it, you didn’t deliver it. I wish I could give you more than I can.” Derek: “For me, the best part was side by side, I still want to see you close your feet, you have to close those ankles. Also, your arms, don’t just through them out, place them.” Bruno: “Only you two could turn the cha cha cha into dirty dancing. I didn’t mind it at all. Be careful the way you place your body and feet. You really have to work on that.” Judges Scores: Carrie Ann: 6, Derek: 6, Bruno: 7 = 19/30

Jeannie Mai and Brandon Armstrong dancing jazz to “Like a Virgin” by Madonna.

Judges Comments: Derek: “You both looked absolutely adorable. It was fun, you are so committed. It was a simple and clean routine.” Bruno: “Just like me, it was squeaky clean. It was Madonna gone PG.” Carrie Ann: “That was incredible, that was an amazing performance. You are the most exciting performance, there is something that lights up.” Judges Scores: Carrie Ann: 8, Derek: 8, Bruno: 8 = 24/30

Judges Comments: Bruno: “You focused like a laser-guided missile. You were so on it, the shapes and lines were brilliant. You have to be careful, when you are on hold don’t grab over him. Great job.” Carrie Ann: “We saved you last week and that was an incredible performance. You brought out the legs this week and you are a dynamic performer, I have not seen that until now.” Derek: I think the best thing that could have happened to you is being in the bottom two because it gave you that extra drive and that extra hunger in that dance, it was so good. You had a choice, sink or swim, and you swam. Thank you, well done.” Judges Scores: Carrie Ann: 9, Derek: 9, Bruno: 8 = 26/30

Judges Comments: Carrie Ann: “Such an elegant and the way you were leading was beautiful. This is the perfect place where you should be this week.” Derek: “AJ I love this style on you, some people think slow dances are easier, but that is not true. That was great.” Bruno: “The king and queen of the prom, you are doing all the right things, great motion. Be careful when you do the underarm turn though.” Judges Scores: Carrie Ann: 8, Derek: 8, Bruno: 8 = 24/30

Skai Jackson and Alan Bersten dancing jazz to “The Power of Love” by Huey Lewis and the News.

Judges Comments: Derek: “Great Scott, that was so much fun. When you are side by side, you light up. Sometimes when you get into the hold, your energy goes back. I want you to improve and get better.” Bruno: “Back to the Future, Mom gave you the right advice, you had the right moves, you survived the lifts. Make sure you keep your score strong.” Carrie Ann: “I love the lifts, you have moments of greatness but because you are so petite, you need to expand your movements to fill up the music, that is something you can work on.” Judges Scores: Carrie Ann: 8, Derek: 8, Bruno: 8 = 24/30

Vernon Davis and Peta Murgatroyd dancing the tango to “Livin’ On a Prayer” by Bon Jovi.

Judges Comments: Bruno: “It started so well, but what happened is you went wrong, there was a link, you went with the wrong foot and your footwork was a little flat. Work on your feet.” Carrie Ann: “I like the quality of movement you are showing us, when you are in hold you are more tender. Work on the transition because you are larger than life.” Derek: “Big kudos to hair and makeup, you both look amazing. What is incredible is that you thrive in the softer dances. I want a little more tact from you. I need to have that book, the attack, but well done.” Judges Scores: Carrie Ann: 7, Derek: 7, Bruno: 7 = 21/30

Kaitlyn Bristowe and Artem Chigvintsev dancing the tango to “I Think We’re Alone Now” by Tiffany.

Judges Comments: Carrie Ann: “I did not see that coming at the end. In the frame, you are far superior to all the tangos tonight.” Derek: “I loved the choreography, the tango, the sharpness, well done.” Bruno: “That was really an 80’s action-packed blockbuster, I mean you never knew what was going to happen next. You made me happy, thank you.” Judges Scores: Carrie Ann: 9, Derek: 9, Bruno: 9 = 27/30

Nelly and Daniella Karagach dance the samba to “Rhythm of the Night” by DeBarge.

Judges Comments: Derek: “Hold my gaze, that was your best dance yet. That was an amazing Samba.” Bruno: “You were so much lighter on your feet, it was effortless and careful. You managed to keep the freedom in your body, you did a proper samba.” Carrie Ann: “I wanna feel good when I watch someone dance and you did that, it was yummy, I wanted to groove with you.” Judges Scores: Carrie Ann: 8, Derek: 8, Bruno: 8 = 24/30

Johnny Weir and Britt Stewart dancing contemporary to “Total Eclipse of the Heart” by Bonnie Taylor.

Judges Comments: Bruno: “What you are doing now, which is the sign of the artist, you give dance a meaning. You have great extension and elevation. Use a little bit of the contraction more.” Carrie Ann: “Turn around and take a bow, that choreography was amazing, the way Johnny delivered that was great.” Derek: “There has always been this expectation, that was perfect. The quality of movement was incredible.” Judges Scores: Carrie Ann: 10, Derek: 10, Bruno: 9 = 29/30

Nev Schulman and Jenna Johnson dance the quickstep to “Take on Me” by a-ha.

Judges Comments: Carrie Ann: “Eighties night, everyone it was amazing. Nev you are one of the most consistent dancers and tonight it was a little awkward, kind of like you were keeping your distance and you weren’t solid on your feet.” Derek: “I absolutely love it. Your face, in the beginning, destroyed me, I loved it. I loved that you found solace in dance, I loved it.” Bruno: “I think you have taken to the quickstep like a duck to water. It was very quick, very on time, and very efficient.”  Judges Scores: Carrie Ann: 8, Derek: 9, Bruno: 9 = 26/30

Time for some results. These are the couples that are safe; Monica Aldama and Val Chmerkovskiy, Nelly and Daniella Karagach, Jeannie Mai and Brandon Armstrong, Johnny Weir and Britt Stewart, Justina Machado and Sasha Farb, AJ McLean and Cheryl Burke, Nev Schulman and Jenna Johnson, Skai Jackson and Alan Bersten, Kaitlyn Bristowe and Artem Chigvintsev, and the last couple who is safe, Chrishell Stause and Gleb Savchenko.

Jesse Metcalfe and Sharna Burgess have been eliminated.