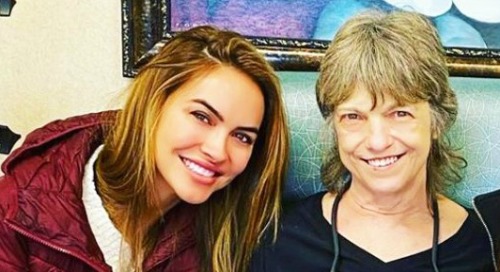 Dancing With the Stars spoilers reveal that Chrishell Stause drew on her “superpower” during last week’s competition, October 19. She also felt that her late parents were right there with her. The Selling Sunset star and Days of Our Lives alum also admitted that her song choice for Villains Night was not cleared and shared if and how she was going to top last week’s performance.

DWTS spoilers reveal that last week, Chrishell dedicated the song and dance routine to her parents. Both passed away from lung cancer, although they were both diagnosed at slightly different times.

Last week, the performance was very different for the actress because of the meaning behind it. She also didn’t want to mess up something that was so important to her, especially with a tribute attached to it.

Guest blogging for ET, Chrishell said that she tapped into her secret superpower to get through the routine. That just happened to be feeling her parents presence. It certainly got her through the performance and made her feel very connected to the dancing — much more so than in previous weeks for obvious reasons.

Dancing With the Stars spoilers reveal that Chrishell was close to her parents, especially her mom. So, losing them both in a short span of time was really difficult for her. Then, you add in the stress of going through a divorce with Justin Hartley and that makes it even harder.

It is during times like these when every girl wants her mom and dad no matter how old they are. So for her to feel her parents presence at such an important and stressful time was a huge deal for Chrishell.

Dancing With the Stars: Villains Night Song Not Cleared

As for what to expect during Villains Night, Chrishell tried to get her first choice cleared. However, it didn’t go through so she and her partner, Gleb Savchenko ended up going with option number two. Now, everyone is wondering how they are going to top last week’s performance. Chrishell confessed,

“I didn’t pick the song but I really think it is perfect once you see what Gleb has cooked up. To be fully transparent, my first choice we couldn’t get cleared. Originally I was lobbying for Mother of Dragons and Gleb as Jon Snow from Game of Thrones. After we realized we couldn’t do that I instantly started to get excited about Maleficent. It’s an iconic character and I cannot wait to put those horns on!”

What do you think of Chrishell Stause admitting her secret superpower? Tell us your thoughts in the comments and remember to come back to CDL for sizzling Dancing With the Stars spoilers, updates and news.