Dancing with the Stars Spoilers: What Happened to Len Goodman? Derek Hough in DWTS Judge’s Spot 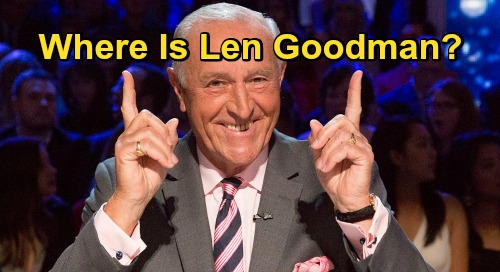 Dancing with the Stars spoilers reveal that fans noticed one big change while watching the series. Judge Len Goodman was missing and Derek Hough was in his spot! Has Len also been replaced or is that another explanation? We gathered up the facts and you can get the details right here, so keep reading.

Earlier this month, ABC network announced through Good Morning America that there would be a new judge when the show returned. Derek Hough was added as the newest judge on DWTS.

In a statement, Hough gushed about being brought back to the show in a different capacity. He explained that the dancing competition TV show feels like home to him and he was excited to be coming back.

DWTS Spoilers: Was There More Replacements?

Considering all the shocking changes that the show has gone through recently, fans are understandably concerned. After all, Len has been a constant presence on the show in every single season except the first one.

Was Len quickly and quietly replaced? Why was his chair occupied by someone else? What exactly happened to Len and will he be returning? The good news is it doesn’t appear that Len has been replaced and there is a good reason for his absence.

Where is Judge Len Goodman?

ABC explained that Len couldn’t appear on the new season of Dancing with the Stars due to the COVID-19 pandemic. While he won’t be judging live from the ballroom like usual, he hasn’t completely vanished. The network said that Len will be participating in a different capacity and sharing his knowledge of ballroom dancing from London.

Due to the global health crisis and those in certain age groups being considered high-risk, traveling isn’t advised. Just like Len will have to participate remotely, Bruno Tonioli is also affected by the coronavirus pandemic. Len is 76 and Bruno is 64, so they are both in the high-risk category.

Now, as far as Bruno, he is not able to judge UK’s Strictly Come Dancing, per Good Housekeeping. For Bruno, it is both the traveling restrictions and his commitment to filming Dancing with the Stars in L.A.

While Len Goodman not being able to judge live in the ballroom due to COVID-19 is understandable, it is just one more thing that is upsetting fans. DWTS has gone through massive changes and passionate viewers are being quite vocal about how they feel about it!

CDL will keep you updated with sizzling hot Dancing with the Stars spoilers, updates and news, so come back here for the newest information.