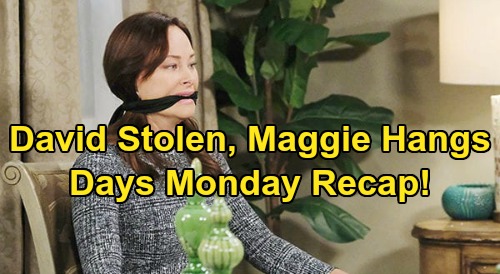 Days of Our Lives (DOOL) spoilers recap for Monday, May 18, reveal that Orpheus (George DelHoyo) told Marlena Evans (Deidre Hall) that he held all the cards. Standing in Marlena’s office, Orpheus showed Marlena that he had John Black (Drake Hogestyn) held hostage via a picture on his phone, then he demanded $10 million so he could run away with David Ridgeway (Kyler Ends). Orpheus instructed Marlena not to contact the police, then he left. Marlena waited a few minutes, then left herself.

Meanwhile, in the interrogation room at the police station, Rafe Hernandez (Galen Gering) was set to go after Orpheus after hearing Zoey Burge’s (Alyshia Ochse) story about the Mother’s Day accident. Rafe got a text from his sitter saying that she needed to leave the house, so Rafe reluctantly allowed Zoey to go watch David.

After Zoey left, Xander Kiriakis (Paul Telfer) walked into interrogation room looking tussled and wondering if Sarah Horton (Linsey Godfrey) had been arrested for running off with Rachel Black. Rafe said no, but that there was something Xander needed to know about Maggie Kiriakis (Suzanne Rogers). Off-screen, Rafe told Xander about Maggie not causing the Mother’s Day accident.

Xander was visibly upset by the news, and Rafe blasted him, saying that if Xander hadn’t interfered with the investigation, then Maggie would have been given a breathalyzer and cleared of any wrongdoing immediately. Xander raced out of the room, off to tell Sarah that Maggie didn’t kill Mackenzie “Mickey” Horton.

Later, Marlena arrived in the squad room as Rafe was on the phone getting updates. Marlena said that she just saw Orpheus, and that he had John and was demanding a ransom so he could run off with David and be with him forever. Rafe raced off to his home after giving instructions for backup to follow with no lights or sirens.

Meanwhile, at Rafe’s house, Zoey talked to David, who was a playpen. Suddenly, Orpheus entered, saying he was here for his grandson. Orpheus berated Zoey, saying that she was going to botch the custody hearing just like she botched Evan Frears aka Christian Maddox’s (Brock Kelly) trial, and that he was going to take David. Orpheus instructed Zoey to go pack David’s things, and she left the room.

Soon, Zoey returned with no bag, and she told Orpheus that she didn’t pack anything for David. Zoey blasted her father for being a criminal, and Orpheus blasted her for judging him.

Zoey reminded her father that he caused the deaths of two people and that Rafe would be there shortly. Orpheus manhandled Zoey and choked her up against a wall. A few minutes later, Rafe arrived to find Zoey tied up and gagged. Zoey told Rafe that her father took David.

Over at Marlena and John’s townhouse, Marlena returned home and looked at a photo of John. “I know how much you want that little boy safe,” Marlena said. Marlena then got on the phone and called someone, saying, “Hi, it’s me, Marlena. I need your help.”

At Eric Brady (Greg Vaughn) and Nicole Walker’s (Arianne Zucker) apartment, Eric and Brady Black (Eric Martsolf) argued over Kristen DiMera (Stacy Haiduk) running off with Rachel, then Brady left. Nicole comforted Eric, eventually calming him down and getting him to understand that Brady was in an impossible situation with Kristen.

Eric initially thought that Brady should have made sure that Kristen went to prison, but Nicole gently defended Brady, saying that she herself had tried to kill Victor Kiriakis (John Aniston) at one point, and that she had run off with Holly Jonas (Elin Alexander). Eventually Eric softened and realized that he’d been too hard on Brady.

At the Brady Pub, Brady sat with a vodka tonic in front of him, contemplating taking a drink. He hesitated, then called Theresa Donovan (Jen Lilley) and eventually spoke with Tate Brady (Colin & Kyle Schroeder) for a bit. Brady then almost drank from his glass, but Sarah came up and stopped him.

Brady and Sarah talked for a while, and Sarah learned through their conversation that Kristen had taken off with Rachel to parts unknown. Sarah wasn’t happy about this, but eventually she calmed down as Brady assured her that Rachel had changed Kristen.

Sarah swigged Brady’s vodka tonic, and she and Brady lamented about what Xander and Victor did. Brady said that Victor was the real instigator, and he blasted his grandfather.

Ultimately, Brady and Sarah decided that both Xander and Victor needed to pay. Brady said that Xander had stolen his job and cost him his daughter, and that he will pay. Sarah and Brady decided to team up to bring down Xander and Victor, and they toasted to sweet revenge.

In Victor’s room at the hospital, he opened the letter from Maggie and started reading Maggie’s words about wanting to say goodbye. Thinking that Maggie wanted a divorce, Victor kept reading. Maggie went on in the lengthy letter about how their marriage had ups and downs, but that Victor should never question her love for him.

Maggie went on about how Victor needed to make amends, especially to Brady, for what he had done. Maggie thought that Victor was callous, since he had lost two children of his own, yet he put Brady thought the pain of losing his. Maggie then said in the letter that she was going to take her own life, and she bid Victor farewell.

Victor was horrified and he immediately called the prison, demanding to speak to the warden. Victor got put on hold, so he frantically called Xander, who was in the park.

Victor told Xander that he got a letter from Maggie and that she was going to try to kill herself. “Get over there! I can’t lose Maggie!” Victor bellowed, and he tried again to call the prison but was put on hold again. “It’s up to Xander now,” Victor said to himself. “I can’t lose you.”

Meanwhile, at the prison, Maggie sat in her cell composing a goodbye letter to Sarah. Maggie said in the letter that it meant a lot to her that Sarah forgave her, but that she doesn’t deserve forgiveness.

Maggie lamented about causing Adrienne Kiriakis’ (Judi Evans) and Mackenzie’s deaths, and she said that it was too much for her to bear. Maggie went on in the letter, telling Sarah to go on with her life and have more children with a good man.

Finally, Maggie sealed the letter to Sarah and placed it on her bed. Maggie then removed the sheets from her bed and started ripping them up and braiding them to make a noose. Meanwhile, Xander rushed in the prison and told a guard that he needed to get to Maggie’s cell immediately, and that Maggie was going to commit suicide.

The guard balked, and Xander took matters into his own hands, pummeling the guard and stealing his keys. Xander then raced into the prison straight to Maggie’s cell, where Maggie appeared to be hanging from the bed. Xander was horrified and rushed into the cell, attempting to get Maggie out of the noose.

That was a terrific episode of Days of Our Lives, and there’s plenty more coming, so stay tuned! Stick with the NBC soap and keep us bookmarked for all your DOOL updates. Here at CDL, we’ve got you covered with daily recaps, spoilers, and news.