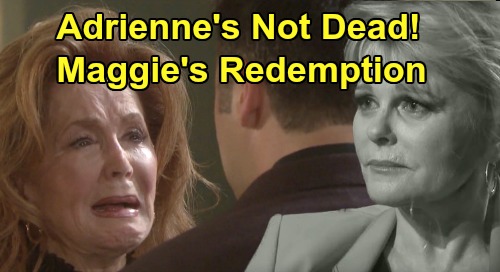 Days of Our Lives (DOOL) spoilers tease that Maggie Kiriakis (Suzanne Rogers) will battle more memory flashes and ultimately confront the people who have tried to protect her. Xander Kiriakis (Paul Telfer) and Victor Kiriakis (John Aniston) are determined to make sure Maggie never finds out she killed Adrienne Kiriakis (Judi Evans). Unfortunately, their plan’s about to blow up in a big way.

After Maggie realizes she was behind the wheel that night, she’ll confess to Sonny Kiriakis (Freddie Smith) and turn herself in at the Salem PD. Maggie will prepare to face her punishment, but there has to be more to the story. Days isn’t just going to lock up Maggie indefinitely, so how will she get out of this mess?

There could be some hints in a recent interview Rogers did with Soap Opera Digest. Rogers admitted that she was shocked when she found out about this storyline. She seemed pretty heartbroken for her character and was desperate for some hope.

Rogers spoke to Albert Alarr, a co-executive producer at Days of Our Lives, and asked him “if there was any redemption at the end of this rainbow” that’d been painted for her. “Albert said, ‘Yeah…eventually,’” according to Rogers. She noted that she kept hearing eventually and “knew there was going to be a whole lot more.”

If we read between the lines there, it pretty much confirms there’ll be a twist. If Maggie’s going to be redeemed, they’ll need to undo this somehow. Again, there’s no way they’ll just plop Maggie in prison and leave her there. That means DOOL has two options when it comes to undoing the damage.

Based on how the story’s played out so far, there weren’t any other cars on the road that night except for the three we already know about: Maggie’s car, Will Horton’s (Chandler Massey) car and Adrienne Kiriakis’ (Judi Evans) car. However, a rewrite could easily change that. Days could make it so someone else was responsible for the crash in the end.

Of course, we also have to point out that Judi Evans will return to DOOL. Wally Kurth (Justin Kiriakis) confirmed that Evans would be back, and she’s already been spotted on set following the hiatus. Evans could reprise her role as Bonnie Lockhart, but what if Adrienne is alive? That would certainly be a way to help redeem Maggie.

This is Salem we’re talking about! Nearly every death is reversed and the details never matter. If Days wants to undo a death, they do it. We watched Will get strangled to death onscreen.

EJ DiMera (last played by James Scott) was cold in the morgue after a gunshot wound. Stefan DiMera (Brandon Barash) is set to return and his heart was supposedly given to Julie Williams (Susan Seaforth Hayes)!

There’s a good chance Adrienne will return as part of Maggie’s redemptive path. Days of Our Lives spoilers, updates and news say some exciting developments are on the way, so we’ll see how things turn out. Rogers’ comments definitely point to some major twists and turns.

Are you glad redemption’s ahead for Maggie? We’ll keep you posted on all the latest news, so don’t miss out Days of Our Lives spoilers and updates.