Days of Our Lives Spoilers: Alyshia Ochse In as Zoey, Kelly Thiebaud Out – Evan’s Sister Shocker, Lawyer is Orpheus’ Daughter 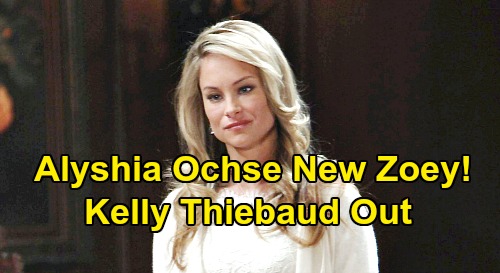 Days of Our Lives (DOOL) spoilers tease that fans will soon get their first glimpse of Evan Frears aka Christian Maddox’s (Brock Kelly) lawyer. When Rafe Hernandez (Galen Gering) mentioned Evan’s attorney during a recent conversation, he added that Orpheus (George DelHoyo) had the same lawyer.

This is apparently significant since we’ll learn that Orpheus sought out this particular attorney – and not just because she’s excellent at what she does. It turns out there’s a family connection, too. Orpheus has talked about Evan’s sister, so it’s time to meet her!

Here’s where things get interesting and a little odd. Kelly Thiebaud will make her debut in the role of Zoey during the week of April 13-17. However, it looks like Thiebaud will only play the part for an episode or two.

For whatever reason, Thiebaud had to be replaced during this story arc. Alyshia Ochse will quickly take over the role of Zoey and will stick around for about 10 episodes more. Thiebaud will share scenes with Rafe before her brief run concludes.

Some Days viewers may remember that Thiebaud played Alicia for a handful of Days episodes back in 2011. General Hospital fans also know Thiebaud is a beloved cast member on GH. Thiebaud plays the always entertaining Britt Westbourne, so her talent surely wasn’t the problem. Perhaps some scheduling issue popped up and Thiebaud had to bail.

Whatever the case, Ochse will step in so we can keep Zoey in the action. It turns out Ochse has also been on Days of Our Lives before. Ochse played a clinical nurse named Sara in 2009, so it’ll be interesting to see her on DOOL again as someone new.

Although it’ll be weird for Zoey’s face to change in the middle of all this, sometimes that’s just the way it goes. If DOOL viewers can accept Dr. Wilhelm Rolf’s (William Utay) serum bringing people back to life and microchips transferring a character’s “essence,” a Zoey recast shouldn’t be a problem!