Days of Our Lives Spoilers: Ava Vitali Returns From The Dead – Steve and Kayla Shocker – Tamara Braun Back To DOOL? 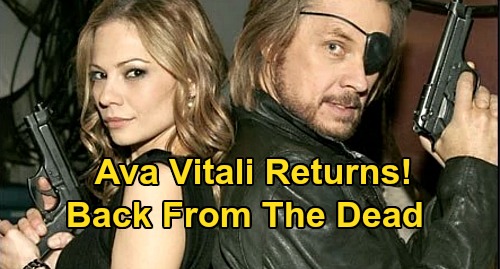 Days of Our Lives (DOOL) spoilers reveal that it’s time to revisit an important topic. DOOL fans will recall that in October 2018, Nicole Walker (Arianne Zucker) stumbled across some mysterious doors at the warehouse that would later explode. Five doors were shown with some significant initials on them.

Let’s recap those doors since we’ve seen several characters return from the dead since them. First, there was the door with E.D. on it. That was obviously EJ DiMera (last played by James Scott), who was rescued after the fire and has been recovering in Europe.

S.D. also had a door, so that had to be Stefano DiMera (Joseph Mascolo) – although Days viewers know Stefan’s body still failed him. Stefano had his “essence” put into Steve Johnson (Stephen Nichols) in the form of a microchip. That storyline’s coming to an end, but there are other doors to consider.

A.D. turned out to be Anthony “Tony” DiMera (Thaao Penghlis), which was certainly great news for Anna DiMera (Leann Hunley). V.A. was Vivian Alamain, who was played by Robin Strasser during Vivian’s last stint. Vivian’s set to make a comeback down the road, but look for Louise Sorel to reprise the role this time around.

W.R. must’ve been Dr. Wilhelm Rolf (William Utay), who returned from the dead to bring all these other characters back. Dr. Rolf clearly spent some time behind a door before he recovered and stirred up more trouble. 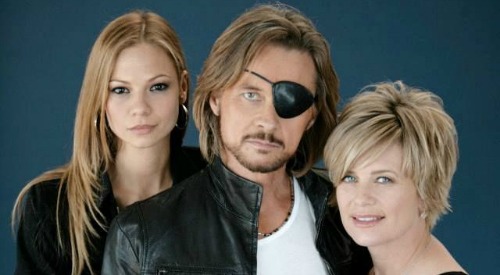 That leaves just one door and one remaining character who hasn’t returned from the dead yet: A.V. Those initials presumably stood for Ava Vitali (Tamara Braun).

Of course, Braun was busy working at General Hospital while these other big returns were happening. Since Braun concluded her GH run as Dr. Kim Nero, maybe it’s time to call her up and lock in a Days comeback.

Due to COVID-19 aka the coronavirus, production has been suspended at Days of Our Lives until the pandemic’s under control. There shouldn’t be any onscreen interruptions since the show films so far in advance.

Once everyone gets back to work, what new stories might be coming? Ava’s return from the dead would certainly shake things up for Steve and Kayla Brady (Mary Beth Evans).

After Steve and Kayla find their way back to each other, perhaps they can remarry and have a little period of happiness. Will Ava eventually strike again and cause problems?

On the bright side, Ava’s comeback would mean Joey Johnson’s (last played by James Lastovic) release from prison. Joey smothered Ava to death with a pillow, but he could get off the hook if that death’s undone.

If Days ever wants some “Stayla” drama and a way to put Joey back on canvas, Ava’s return is the perfect solution. As other DOOL details emerge, we’ll pass along any available updates. Days of Our Lives spoilers say hot drama’s looming no matter what!

Would you like to see Ava Vitali come back from the dead? Be sure to drop by CDL frequently for even more Days of Our Lives spoilers, updates and news.