Days of Our Lives Spoilers: Baby Rachel Isabella Reunites with Brady & Kristen – See What Happens After Parents Get Beloved Daughter Back 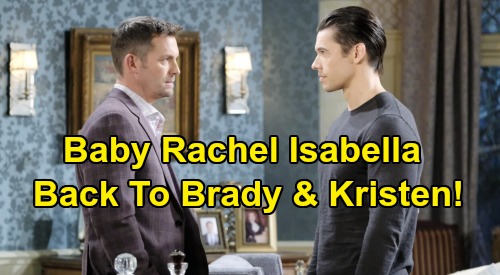 Days of Our Lives (DOOL) spoilers tease that Kristen DiMera (Stacy Haiduk) and Brady Black (Eric Martsolf) will grow even closer. So much for Brady trying to steer clear of his ex! We all knew it was just a matter of time until Brady inched his way in Kristen’s direction.

Brady’s fake romance with Nicole Walker (Arianne Zucker) was futile since he’s powerless when it comes to temptation. He can’t resist whatever woman he can’t have – and Kristen in particular really drives Brady wild. However, Days is focusing on Brady and Kristen’s deep connection for now. The loss of their child is something they feel will bind them forever.

Of course, DOOL fans are in the loop on far more than Kristen and Brady. Their beloved daughter, Rachel Isabella DiMera Black, is alive and living right there in Salem as Mackenzie “Mickey” Horton.

Days of Our Lives spoilers say the truth will have to come out eventually. When it does, you can bet Kristen and Brady are going to struggle with a flood of complicated emotions.

Brady and Kristen believe their little girl’s gone for good, so they’ll be overjoyed to know Rachel survived. Naturally, they’ll also be confused about how this happened – and will ultimately rage at those responsible.

Victor Kiriakis (John Aniston) and Xander Kiriakis (Paul Telfer) deserve every bit of the fierce “Bristen” wrath they’ll face. They need to suffer for the horrible pain they’ve put Kristen and Brady through.

Kristen has made her fair share of mistakes and undoubtedly has many more to come. Even so, Kristen has a soft spot for children. It was her deepest desire to be a mother and Victor robbed her of that.

And then there’s Brady, Victor’s own grandson. Rachel’s middle name, Isabella, is the name of Brady’s mother and Victor’s daughter! Could Victor possibly sink any worse than this twisted baby switch?

Victor’s attempt to shield guilty Maggie Kiriakis (Suzanne Rogers) from heartache is bound to backfire. The same goes for Xander, who’ll have to deal with Kristen and Brady’s fury as well as Sarah Horton’s (Linsey Godfrey).

Days of Our Lives spoilers say the baby swap revelation will unleash chaos and bring even more Salem shockers.

Are you excited to see Brady and Kristen reunited with Rachel? Do you want Victor and Xander to pay for the suffering they caused? We’ll give you updates as other Days news comes in. Stay tuned to DOOL and don’t forget to check CDL often for the latest Days of Our Lives spoilers, updates and news.