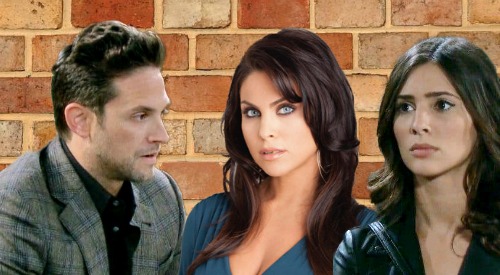 Days of Our Lives spoilers reveal a big return is coming up. Of course, we are talking about Brandon Barash, who portrayed Stefan DiMera. If the actor reprises his original role, then Gabi Hernandez (Camila Banus) may have a second chance for true love. However, soap romances are rarely without obstacles. Could Chloe Lane (Nadia Bjorlin) cause complications?

DOOL spoilers confirm Barash is returning and while an exact date has not been announced, it is teased it will be around April 2020. That is just around the corner, which means things are being set up to weave his character into existing, as well as new storylines.

We don’t know for certain if Barash is reprising Stefan, who was declared brain-dead and was unable to be resurrected. Despite all of the possible theories, Stefan being alive makes the most sense. After all, nobody truly stays dead in Salem, so Stefan probably won’t be any different.

Despite having a rocky history with Stefan, the two finally admitted their love for one another. It seemed that Gabi was finally getting her fairy tale ending. Just when she finally had everything she ever wanted, Stefan was taken away from her.

Over a year later and Gabi is still grieving. That was clear from her crying over his photo as she was getting ready to marry Eli Grant (Lamon Archey).

Now that Eli and Lani Price (Sal Stowers) have reunited, that leaves Gabi alone. Even though she is a villain, she still does have intense emotions. Probably the only person that will be able to stabilize her is Stefan.

The wicked widow’s deadly deeds are due to her intense agony. If you give her back her soul mate, then we might see she has a heart after all. It might put an end to her murderous motivations, at least until her love story is threatened.

Days of Our Lives spoilers reveal Chloe could be returning. The character often pops in and out of Salem, so we expect her to come back at some point in the future. As fans may recall, before “Stabi” became a hot item, Stefan was involved with the opera singer. However, that romance ended when she caught Stefan and Gabi in a compromising position.

Despite Stefan being unable to resist Gabi, he always had an attraction to Chloe. Just because their relationship fizzled doesn’t mean that attraction went away. In fact, when he returns we could see the beginning of another love triangle.

Gabi has lost nearly every relationship because of another woman. If she discovers that there is a lingering attraction between Stefan and Chloe, then the Latina fashionista will do whatever it takes to eliminate the competition.

Gabi already lost Stefan once, through death, and she won’t lose him again. Especially to another woman. The question is, how far will Gabi go to hold onto her man and could Stefan’s attraction to Chloe be stronger than anyone realizes?

Don’t miss all our hot DOOL news here at CDL. We’ll pass along plenty of updates as other Days of Our Lives spoilers and news rolls in.