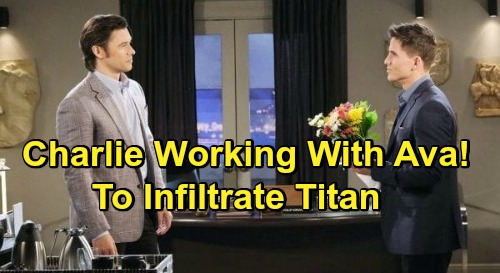 Days of Our Lives (DOOL) spoilers tease that Charlie Dale (Mike C. Manning) really seems to have a choice internship at Titan Industries. As DOOL viewers know, Charlie is interning for the Co-CEOs Xander Kiriakis (Paul Telfer) and Philip Kiriakis (Jay Kenneth Johnson), which is turning out to quite a time-consuming job.

It seems like Charlie works late every single night, and he even stayed late during the big power outage to get a big project done for his bosses.

Charlie tends to be a bit of a bumbling nice guy on the job, and recently Xander overheard him on the phone talking with Claire Brady (Isabel Durant).

Xander thought that Charlie was being too much of a blithering pushover with Claire, and he promptly instructed Charlie to go right over to Claire’s and insist that they have a dinner date right now. Charlie seemed unsure of himself, but Xander insisted that he “man up” and go show Claire how much he cares.

But is Charlie’s nice guy routine genuine? There’s been a lot of buzz about how Charlie might turn out to be Ava Vitali’s (Tamara Braun) son, and possibly the person who raped Allie Horton (Lindsay Arnold) – which would explain why Tripp Dalton’s (Lucas Adams) DNA appeared to match that of Henry Horton’s (Jayna and Kinsley Fox).

According to Days of Our Lives spoilers, Ava will resurface on the Salem scene this week, when she shows up to check in on Philip’s actions.

As it will turn out, Ava will be Philip’s partner in crime, and their quest will be to launder money through Titan Industries. Well, since Charlie’s suddenly an intern at Titan Industries, that begs the question of whether perhaps he’s a plant at the company.

Might Ava have Charlie at Titan to check up on Philip, perhaps even without Philip’s knowledge? If that’s the case, then the relationship between Charlie and Xander might not quite be what it seems.

We’ll see what happens here, but we suspect there’s a connection between the new Titan intern and Ava and Philip’s plot to launder money through the company.

And if Ava is in fact Charlie’s mom, then he could be just as evil as she is! We could be looking at a situation where Charlie is totally putting on an act, and underneath the nice guy persona is a calculating criminal. That would certainly mesh with the buzz that Charlie could be Allie’s rapist.

In fact, Charlie’s connection with Claire could even be a ruse to infiltrate Titan at its core and to get close to Victor Kiriakis (John Aniston) for some purpose of Ava’s.

There are a lot of connections and coincidences here, and that probably means there’s more to the story! It would be interesting if we were to find out that Charlie really isn’t the naïve kid that he seems to be and that he’s part of a criminal plan.

Do you think that Charlie’s nice guy routine is just a ruse? Stay tuned to the NBC soap and don’t forget to check CDL frequently for the latest Days of Our Lives spoilers, daily episode recaps, and news.