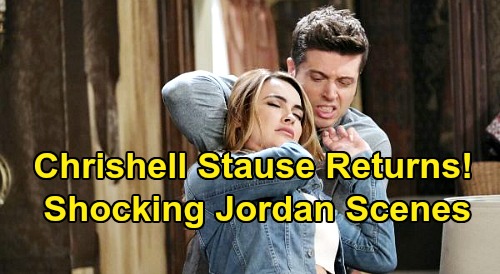 Days of Our Lives (DOOL) spoilers reveal that Chrishell Stause is set to reprise her role as Jordan Ridgeway, but she won’t be making a miraculous return from the dead – not yet anyway! Never say never in Salem, but DOOL fans can expect to see Jordan in flashbacks for now.

It looks like when Evan Frears aka Christian Maddox (Brock Kelly) makes his full confession, Days will take us back in time. They’ll show us the events that led to Evan strangling Jordan and leaving her body for Ben Weston (Robert Scott Wilson) to find.

Someone Days’ promo department put out a fun teaser for the episode airing Wednesday, March 4. The GIF features Evan starting his faceoff with Jordan, who seems angry and terrified. Little did Jordan know she was about to meet a grim fate!

Evan feels like Jordan was a total psycho – and he’s not wrong. However, Evan’s no better considering he murdered his “baby mama” and had a whole hostage situation going at the Kiriakis mansion. He’s just as crazy as Jordan and perhaps even more prone to violence.

Nevertheless, Evan will defend his actions and argue that he was just protecting his son. He does seem to care about David Ridgeway (Caleb and Kyler Ends) in his own twisted way, but he’s clearly not father material. Evan was able to keep up the good guy act around town though. Sonny Kiriakis (Freddie Smith) thought Evan was pretty Zen and even complimented his gluten-free brownies!

Unfortunately, Evan has proven that he flies off the handle when he’s pushed to his limit. Days of Our Lives fans got a taste of that during the mansion drama. Evan was a raging mess and couldn’t handle everything going horribly wrong. It’s easy to see how Evan snapped and killed Jordan in those horrifying moments.

Days of Our Lives spoilers and updates say these flashbacks will deliver another glimpse of Evan’s dark side. It’s great that Evan was finally exposed since he doesn’t need to be around David. Of course, Evan’s confession also means Ben will get off the hook, so that’s certainly fantastic news for Ben, Ciara Brady (Victoria Konefal) and “Cin” fans.

Ben will flatline briefly thanks to his lethal injection, but Ciara will beg Ben to come back to her. It won’t be long until he does, but Jordan will remain dead and buried for the time being. At least Ben can take comfort in knowing he won’t die for his own sister’s murder!

It sounds like some fantastic scenes are coming up. We’ll pass along DOOL news as it becomes available. Don’t miss all out hot Days of Our Lives spoilers and updates here at CDL.