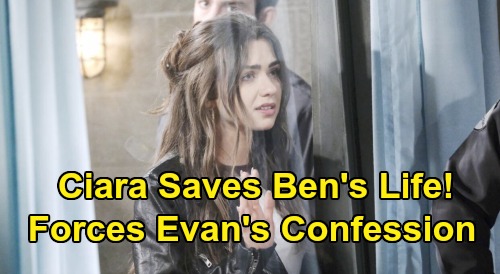 Days of Our Lives (DOOL) spoilers tease that Ben Weston (Robert Scott Wilson) will accept that the end is near. He didn’t kill Jordan Ridgeway (Chrishell Stause), but he’s facing the death penalty for her murder anyway. Ben will feel like he’s out of options and just needs to accept his fate.

Although Ben may appreciate Ciara Brady’s (Victoria Konefal) last-ditch effort to help, he probably won’t have much hope left. Ben might just be glad Ciara has something to keep her busy while he dies. He won’t want Ciara hanging around watching him fade away.

After figuring out that Evan Frears (Brock Kelly) is David Ridgeway’s (Caleb and Kyler Ends) father and apparently Jordan’s killer, they’ll race off to find him. It turns out a shocking scene will be unfolding as Will and Ciara arrive.

Days spoilers say Evan will be holding Sonny Kiriakis (Freddie Smith) at gunpoint, but Ciara will turn the tables. After a brief struggle over the gun, Ciara will snatch it away from Evan and gain the upper hand. DOOL fans can expect Ciara to bark orders soon after. She’ll know the clock is ticking, so she’ll force Evan to head over to the prison with her.

It sounds like Ciara will want Evan to make a full confession so Ben’s execution can be stopped. There’ll be no time to go through the proper legal channels. Ciara’s best shot will be to drag Evan to Statesville and talk him into confessing. Since Ciara will have evidence by then, she can use that to back up Evan’s admission later.

Unfortunately, Ciara’s in for a shock once she arrives. Days of Our Lives spoilers say Ben’s execution will move forward while this Evan faceoff’s going on. After Ciara barges in with Evan, she may realize she’s too late.

DOOL viewers will see Ben flatline at some point, so Ciara should be in total panic mode. She’ll need Evan to confess so they can undo the damage immediately.