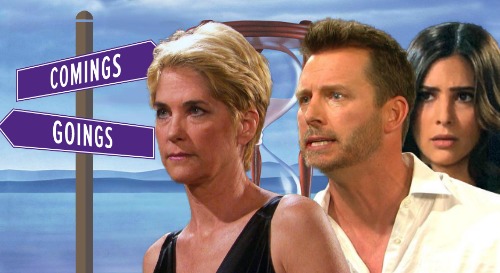 Days of Our Lives (DOOL) spoilers tease that there’s more comings and goings news to pass along. DOOL’s been shaking up the cast and will continue to do so in the months ahead. Days fans want to know who’s staying and who’s leaving, so here’s the scoop on what you can expect.

Kristen DiMera’s (Stacy Haiduk) short return stint will also conclude during the week of June 29-July 3. After Kristen reunites with Brady Black (Eric Martsolf), he’ll make an impulsive decision to leave Salem with her. Fortunately, Days of Our Lives spoilers say Kristen and Brady will be back down the road.

Vivian Alamain (Louise Sorel) will also resurface in the week ahead – and Ivan Marais (Ivan G’Vera) won’t be far behind. DOOL fans will recall that Ivan is Lawrence Alamain’s (Michael Sabatino) former manservant. Ivan fell in love with Vivian and consistently helped her pull off schemes, so he could be back to aid a plot or two.

It looks like Judi Evans will make her comeback during the week of July 6-10, although Days hasn’t officially confirmed whether Evans is playing Bonnie Lockhart, Adrienne Kiriakis or both.

Alison Sweeney has confirmed her first airdate back will be July 14 – just in time for Eric Brady (Greg Vaughan) and Nicole Walker’s (Arianne Zucker) nuptials.

Marci Miller will also reprise the role of Abigail DiMera, so look for her to take over for Kate Mansi when Abby returns from Florida. An Eduardo Hernandez (A Martinez) sighting is expected this summer as well, so stay tuned for that.

Claire Brady (Olivia Rose Keegan) will sadly finish her short-term arc around August, which means Days fans will have to say goodbye to “Claire Bear” again. Gwen (Emily O’Brien), on the other hand, will remain in Salem.

The same goes for Allie Horton (Lindsay Arnold). Although O’Brien and Arnold aren’t currently on contract, they were still shooting new scenes when the show suspended production.

Philip Kiriakis (Jay Kenneth Johnson) will reappear just before summer turns to fall. Days of Our Lives spoilers say Chloe Lane (Nadia Bjorlin) will show back up not too long after, so it’ll be great to have these two back in town.

Rafe Hernandez (Galen Gering), Will Horton (Chandler Massey) and Sonny Kiriakis (Freddie Smith) will make their onscreen departures by the end of August. They were all previously scheduled to leave in September, but skipped preemptions affected when their final episodes will air.

Finally, Gabi Hernandez DiMera (Camila Banus) should exit in some way around August or September. Days of Our Lives buzz insists that contract issues led to Banus being off set. Since Banus reportedly wasn’t filming for a while, there’ll likely be some explanation for that onscreen.

Gabi might leave town or take a trip, but being held captive is another possibility. Regardless, Days spoilers point to Gabi departing in some fashion, although she could easily pop back up like Chad DiMera (Billy Flynn) and many others. It’s all about those contract negotiations and whether they worked out.

That’s it on comings and goings news for now, but we’ll keep bringing you updates! DOOL fans won’t want to miss the action happening in the months to come. CDL’s the place to be for exciting Days of Our Lives spoilers, updates and news.