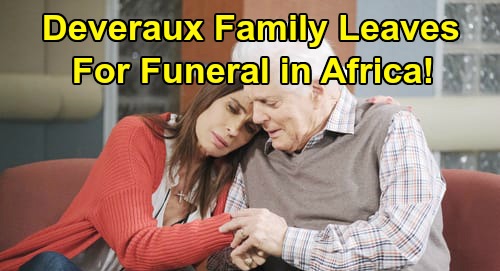 Days of Our Lives (DOOL) spoilers tease that Jennifer Deveraux (Melissa Reeves) will get some news that leaves her heartbroken. She’ll get updates on her father, Bill Horton (Edward Mallory), passing away. This is the February sweeps death that was promised, and it’ll certainly be a tough blow for those connected to the Horton clan.

However, Jennifer will accept that it was Bill’s time and focus on fond memories. She’ll reflect on the life Bill lived and take comfort in knowing he had a full one. Days of Our Lives spoilers say Jack Deveraux (Matthew Ashford) will be there for Jennifer as she copes. They’ll both join Doug Williams (Bill Hayes) at Julie’s Place, where they’ll raise their glasses to Bill and other beloved family members they’ve lost over the years.

Bill is a significant part of Doug’s story, which is why this death is happening. DOOL wanted to honor Hayes’ 50th anniversary on the show, so they’re using this demise to tie in some flashbacks and recap how Doug came to Salem.

When Hayes made his first appearance on Days, he was known as Brent Douglas. Bill was his cellmate, who offered plenty of details about life in Salem. Doug eventually scored his freedom, made his way to the town Bill talked about and the rest is history.

Bill’s death honestly seems like a somber way to celebrate, but it’ll probably be more uplifting than it sounds. Days of Our Lives spoilers say they’ll mostly concentrate on Doug since this is about honoring Hayes and his tremendous contribution to the show. It’ll be nice to see a little walk down memory lane.

Of course, funeral arrangements will have to be made for Bill. It turns out Bill’s funeral will take place in Africa, so Jennifer will plan to fly there along with Jack, Abigail DiMera (Kate Mansi) and JJ Deveraux (Casey Moss). Since JJ’s exit is rapidly approaching, there’s a chance he simply won’t come back after this trip.

JJ may use this as an opportunity to seek a fresh start far away from the pain of Salem. He’s faced some struggles since Haley Chen (Thia Megia) died, so this could be good for him. After all, JJ can always return down the road if Days decides it’s the right call.

As for the rest of the Deveraux fam, they’ll be back after they pay their respects. Days of Our Lives spoilers say some gripping episodes are coming up, so don’t miss what’s in store. As other DOOL news and updates surface, be sure to check out all CDL’s hot posts.