Days of Our Lives Spoilers: Did Summer Cause Adrienne’s Death – Maggie Innocent?

BY hellodrdavis on January 26, 2020 | Comments: one comment
Related : Days of Our Lives, Soap Opera, Spoiler, Television 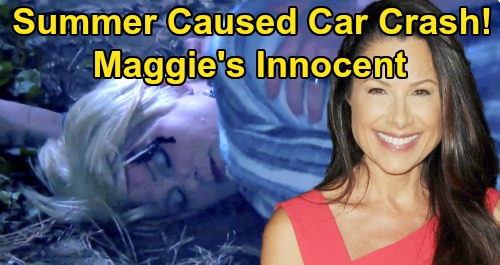 Days of Our Lives (DOOL) spoilers tease that things could get pretty harrowing for Maggie Kiriakis (Suzanne Rogers) in the days to come. As DOOL viewers know, Ciara Brady (Victoria Konefal) has recently learned from Victor Kiriakis (John Aniston) and Xander Kiriakis (Paul Telfer) about what really happened on the night that Adrienne Kiriakis (Judi Evans) died – specifically, that Maggie caused the accident that took Adrienne’s life.

This was a huge revelation for Ciara, especially since Maggie has no idea about all of this. Maggie doesn’t remember that she got behind the wheel on the night of Adrienne’s death, because she was intoxicated and blacked out for the evening.

Xander found her on the side of the road passed out in her car, and he quickly put together what had happened. But did things really happen the way that Xander assumed?

Xander naturally concluded that it was Maggie and not Will Horton (Chandler Massey) who must have swerved into Adrienne’s lane and caused the accident that night. And that’s a reasonable assumption, given that he found Maggie drunk in her car in the same vicinity as the accident.

In fact, Xander and Victor were so sure that Maggie caused the accident that they conspired to make sure that she never knew about it and that Will took the blame and faced the legal ramifications for Adrienne’s death.

But what if something else actually happened? What if it was neither Will nor Maggie who drove the car that swerved into Adrienne’s lane on that fateful night?

DOOL viewers will remember that there is someone else would could have been driving out on Route 7 that night: Summer Townsend (Marie Wilson).

Summer had just been at the Kiriakis mansion to see Maggie, during which she told Maggie that she was a drunk and had recently tried to drink herself to death in Las Vegas.

Summer then told Maggie that she was dying of advanced cirrhosis of the liver before she gulped down a drink and left the mansion, leaving Maggie completely shaken and turning to the bottle herself.

The timing certainly fits here, and Summer could well have been the person swerving out on the road that night – after all, she had just had a drink and was probably drinking steadily before she saw Maggie.

Well, one wonders how this will all play out. As it stands, Ciara seems determined to clear Will by telling the “truth” about Maggie being the person who caused Adrienne’s death.

If she does, then Maggie could be facing some serious charges and total devastation as she comes to believe that she caused someone’s death. But if indeed it was really Summer who caused the accident, then that means that both Maggie and Will are innocent.

The question remains how would this ever come out? If Summer swerved into Adrienne’s lane, then drove away without Will, Adrienne, or Sarah Horton (Linsey Godfrey) seeing her, it could be a long time before anyone ever knows.

And in the meantime, Maggie could be really suffering, thinking that she was responsible. Do you think that Summer is the person who caused the accident?

Savvy Days fans have to wonder why Summer would be brought back to Salem at this critical time – DOOL buzz is that she is responsible for the fatal crash. Stay tuned to DOOL and don’t forget to check CDL often for the latest Days of Our Lives spoilers, updates, and news.