Days of Our Lives Spoilers: DOOL Officially Renewed for 56th Season – Fans Celebrate, Much More Drama to Come in Salem 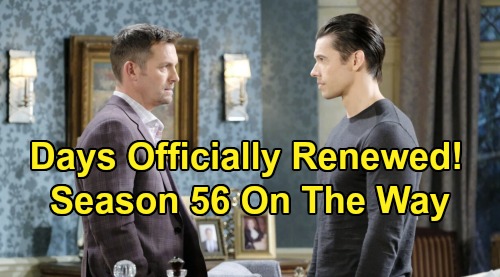 Days of Our Lives (DOOL) spoilers reveal that the NBC soap has finally locked in a deal. DOOL was officially renewed for its 56th season, so that’s fantastic news for Days fans. The sands will keep running through the hourglass, which means there are many more twists and turns ahead in Salem.

You might be thinking that Days of Our Lives was already renewed, but it wasn’t quite official until now. It was close enough to a done deal that the cast and crew were informed back in November, but they were still waiting on confirmation.

Then, NBC Chairman Paul Telegdy made a firmer announcement at TCA a couple weeks ago. He reassured Days viewers that the show would carry on, so we all knew he wouldn’t go back on his word. Thankfully, everything worked out like it should and all the formalities were squared away.

“It’s officially official” as DOOL Head Writer Ron Carlivati put it in a recent tweet. Plenty of Days stars have been sending out celebratory messages, too. The same goes for fans, who are thrilled to know the show will continue to deliver major drama. We all want to keep the soap genre alive, so it’s great that Days will press on.

According to Deadline, renewal negotiations were held up due to what Sony Pictures TV wanted to accomplish. Their sources say DOOL’s distributor hoped to adapt the show’s business model, including international sales.

It was important to nail down all the details so they could keep Days affordable and on the air – hopefully for many years to come!

It took months to reach this official deal, but now we’ve finally got one and can just concentrate on all the action in Salem. Days of Our Lives spoilers say there are still several mysteries left to unravel.

There are also some major exposures brewing – like the baby swap that Xander Kiriakis (Paul Telfer) and Victor Kiriakis (John Aniston) set in motion. That bomb’s sure to send shockwaves down the road.

What do you think about DOOL’s official renewal? Are you glad they were able to lock in the show’s 56th season? We’ll give you updates as other Days news comes in. Stay tuned to the NBC soap and don’t forget to check CDL often for the latest Days of Our Lives spoilers, updates and news.