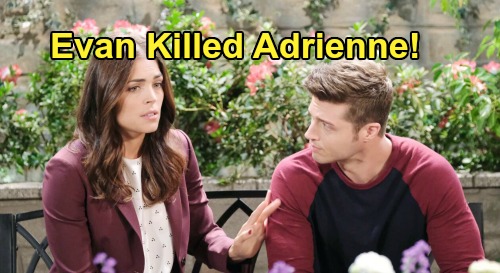 Days of Our Lives (DOOL) spoilers tease that Evan Frears aka Christian Maddox (Brock Kelly) has a big secret to spill. He’ll drop a bomb on his sister, Zoey Burge (Kelly Thiebaud), soon enough, but he’ll leave out some crucial facts. Orpheus (George DelHoyo) insisted Zoey didn’t need to know everything, so Evan isn’t going to divulge every last detail.

However, Evan will at least confess one shocker. It’ll surely be something that ties in with other characters and brings the potential for drama. Could Evan be behind the crash that killed Adrienne Kiriakis (Judi Evans)?

There are some good reasons to think so – particularly since Maggie Kiriakis (Suzanne Rogers) needs a get-out-of-jail-free card.

Days of Our Lives spoilers say Zoey will be floored by whatever Evan confesses, but she won’t turn against him because of it. That tells us that even if Evan’s secret is a crime, he can justify it or perhaps explain it an accident. Zoey won’t hold this DOOL bombshell against her little brother and that’s important.

If Evan confesses to causing Adrienne’s death, Zoey could get past that. She’s already been justifying Jordan Ridgeway’s (Chrishell Stause) murder as an “accident,” so explaining away this deadly collision wouldn’t be an issue. Zoey’s detached from this situation, which makes Evan her priority.

Nevertheless, Evan’s admission to Zoey might set up some stunning courtroom moments. Days spoilers say Evan’s trial is coming up – and Zoey will use intimidation tactics with Sonny Kiriakis (Freddie Smith) beforehand. It’s interesting that Zoey will try to bully Sonny a bit and make him less of a threat.

Will there be a reason beyond Evan and Sonny’s previous romantic connection? Zoey may feel like she needs to take extra precautions with Sonny – perhaps due to this crash that links them. Zoey certainly wouldn’t want Evan to go down for killing Sonny’s mom on top of Jordan’s murder!

That crash also resulted in the death of Sarah Horton’s (Linsey Godfrey) baby, at least at this point in the story. There’s a chance the real Mackenzie “Mickey” Horton is alive through a third switch, so that’s another shocker to potentially watch out for.

For now though, Zoey might hope to scare Sonny out of testifying or keep him from saying too much on the stand. She could end up being nervous about this crash puzzle coming together through Evan’s connection to Sonny. It’s an intriguing option to ponder as we build to Evan’s major confession on April 29!