BY hellodrdavis on March 18, 2020 | Comments: one comment
Related : Days of Our Lives, Soap Opera, Spoiler, Television 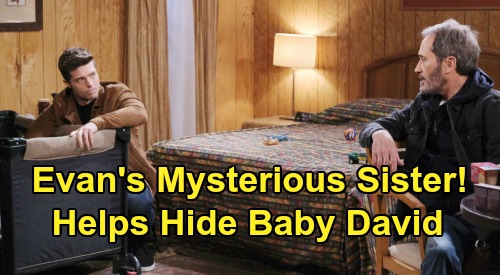 Days of Our Lives (DOOL) spoilers tease that Evan Frears aka Christian Maddox (Brock Kelly) is stirring up all sorts of trouble in Salem. As DOOL viewers know, Evan started out as a caring, nice guy who was David Ridgeway’s (Caleb and Kyler Ends) nanny and who eventually caught the eye of Sonny Kiriakis (Freddie Smith).

But in recent weeks, DOOL viewers have seen Evan’s dark side, including a flashback to his killing of Jordan Ridgeway (Chrishell Stause). And now, Evan has been revealed to be David’s biological father and the son of DOOL supervillain Orpheus (George DelHoyo). Evan and Orpheus are in possession of David and they seem to be on the verge of going on the run.

Of course, Rafe Hernandez (Galen Gering) is on the hunt for Evan, along with the help of Eli Grant (Lamon Archey) and Lani Price (Sal Stowers). They’re narrowing their search little by little, and it seems that in time, it will become apparent that Evan’s got some serious help in his quest to keep David. Eventually, Rafe will put it together and realize that his beloved David is actually the grandson of Orpheus.

Now, Orpheus surely has some vast resources to draw upon as he prepares to take Evan and David and get out of town. Even though Evan has balked at the idea of going on the run with David, it doesn’t seem like he really has much choice at this point.

He and Orpheus may need to turn to some of Orpheus’ resources for help. And there’s one person in particular who could emerge to help them – Evan’s sister.

Evan’s sister has been recently mentioned on DOOL by Orpheus. Specifically, Orpheus said that he had reached out to both Evan and his sister as adults and that he had been accepted back into their lives.

Long-time DOOL viewers will remember that in the late 1980s, Orpheus forced Marlena Evans (Deidre Hall) to be a mother-figure to Evan (then called Christian) and his unnamed younger sister.

But it’s been years since Marlena has seen Evan, and she clearly didn’t recognize him when Ciara Brady (Victoria Konefal) brought him at gunpoint into the prison to confess to killing Jordan and save Ben Weston (Robert Scott Wilson) from execution. At any rate, the fact remains that Evan’s got a sister out there.

So, will we see Orpheus’ daughter appear on the DOOL scene soon? Might she step up to help her brother Evan out in his time of need? We’ll see what happens here, but adding another sibling to the mix would certainly shake things up for Evan.

Besides, it seems like Orpheus and Evan need some help if they’re going to continue to evade the police with David.

Would you like to see Orpheus’ daughter make an appearance in Salem? Stick with CDL for all your Days of Our Lives spoilers and updates, and we’ll be sure to keep you informed as more DOOL news comes in.

With the confirmation that Evan is Orpheus’ son, here is “Evan” in 1986 with kidnapped Marlena who was being forced to play mommy to him and his sister. Orpheus blamed RoJohn for killing his wife. #days #Jarlena pic.twitter.com/jjghpjw5ry