Days of Our Lives Spoilers: Freddie Smith & Chandler Massey’s Exit Update – Reveals How Many Episodes Until Sonny Leaves with Will 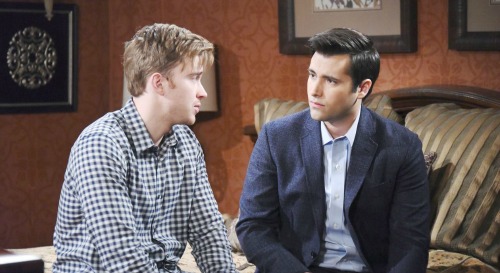 Days of Our Lives (DOOL) spoilers reveal that one NBC soap star offered an update on his looming exit. As most DOOL fans have probably heard by now, Freddie Smith (Sonny Kiriakis) will be departing the NBC soap along with Chandler Massey (Will Horton) later this year. On Twitter, Smith passed along some news about how many episodes he has left between now and his final airdate in September.

“I remember shooting today’s Days scenes and got me thinking about how many episodes Sonny has left to air,” Smith said after the April 27 show. “I’m not 100% sure but looking through my emails, looks like 36 more episodes between now and sometime in September! So you got more Sonny Days ahead.”

It’s great that we have more “Sonny Days,” but it’s sad they’ll have to end eventually. Smith’s remaining episode count should be pretty close to Massey’s. Days of Our Lives spoilers say they’re gearing up for a joint exit, which will come about after some sudden shifts in the story.

Will and Sonny’s last few episodes will set the stage for their abrupt departure. Of course, there’ll be plenty of material to cover between now and then. Will and Sonny have been talking about a family addition, so they could get the ball rolling on an adoption before they ultimately leave.

There’s also the matter of shady Evan Frears aka Christian Maddox (Brock Kelly). Days of Our Lives spoilers say Sonny will plan to testify at Evan’s trial, but Zoey Burge (Kelly Thiebaud) will do her best to intimidate him.

Will’s been involved in Gabi DiMera’s (Camila Banus) latest storyline so far, so he may offer more advice once Gabi meets Jake Lambert (Brandon Barash) – a dead ringer for Stefan DiMera (Brandon Barash). You can bet Gabi’s going to need all the support she can get!

Sonny’s waiting for updates on Victor Kiriakis (John Aniston) as well, so he’ll remain tied to all the Kiriakis chaos. There are tons of ways for Will and Sonny to fit in the action, which is why it’s such a bummer that they’re leaving down the road!

Thankfully, Days tends to bring characters back frequently. Will and Sonny may return at some point, so “WilSon” fans will hold out hope! We’ll keep you posted as more DOOL details roll in.

I remember shooting today’s Days scenes and got me thinking about how many episodes Sonny has left to air. I’m not 100% sure but looking through my emails, looks like 36 more episodes between now and sometime in September! So you got more Sonny Days ahead.