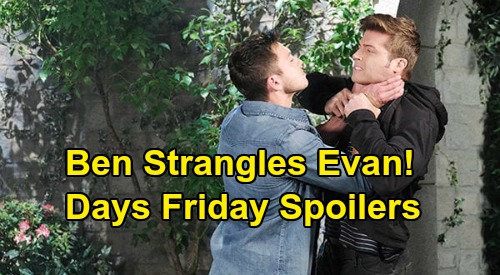 Days of Our Lives (DOOL) spoilers for Friday, April 17, tease that Rafe Hernandez (Galen Gering) will freak over the intruder he just found. Orpheus (George DelHoyo) was there waiting when Rafe returned home, so a major showdown’s on the way. DOOL fans can expect Rafe to pull his gun on Orpheus. He’ll push Orpheus to put his hands in the air and most likely rant over this villain’s escape.

Of course, Rafe doesn’t know that Orpheus is a free man! He had already left the police station when Zoey Burge (Kelly Thiebaud) came back to make the announcement. Days should offer up the details of how Zoey made that possible, but the point is Orpheus has been released – at least for now.

Orpheus has every right to roam around Salem, but he doesn’t have a right to break in Rafe’s house. Rafe may remind Orpheus of that and threaten to arrest him again, but Orpheus will find a way to wiggle out of trouble. Perhaps he’ll argue that it’d look like harassment – especially since he’s just there for a “friendly” visit. 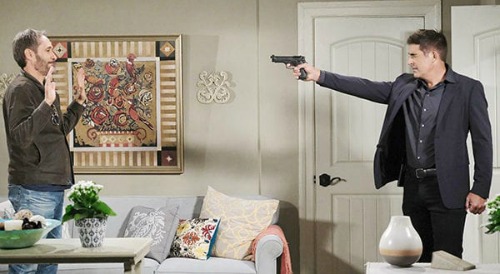 Jordan Ridgeway’s (Chrishell Stause) dead because of Evan, but Orpheus won’t think his son will be convicted of that. He’ll believe Evan deserves a chance to raise David, but Rafe will make it clear that it’s not happening.

Before Ben can strangle David’s dad, Ciara will convince him to stop. It won’t be long until Ben loosens his grip and lets a gasping Evan fall to the ground.

Days spoilers say Ciara will be rattled over Ben’s actions, but they’ll have to put everything on hold and get David home. Rafe will cuddle with David as he plays with his truck, but he’ll definitely worry about losing custody.

It seems like Evan and Orpheus are avoiding legal hurdles around every turn, so Rafe will cling to David and hope he can remain the boy’s father figure.

Other Days of Our Lives spoilers say Marlena Evans (Deidre Hall) will get updates on Orpheus’ release. John Black (Drake Hogestyn) will break this disturbing news and offer reassurance to his love.

Orpheus has a history of targeting Marlena, but John will promise to protect her and conquer any other obstacles that head their way.

Over with Justin Kiriakis (Wally Kurth), he’ll talk to Steve Johnson (Stephen Nichols) about their mutual love interest. Justin knows things are complicated, but he still wants a future with Kayla Brady (Mary Beth Evans). That’s why Justin just isn’t willing to step aside and let Steve reclaim his spot.

Justin will insist he intends to fight for Kayla, which Steve may respect on some level. However, Steve plans to fight for Kayla as well. He’ll change his mind about that by the time next week rolls around, but this is shaping up to be quite a battle in the meantime.

Finally, Jennifer Deveraux (Melissa Reeves) will get caught in the middle of all this Steve, Justin and Kayla drama. At the hospital, Jennifer will listen to Kayla’s troubles and give her some good advice about following her heart.

Soon after, Jennifer will bump into Justin at Doug’s Place. Justin may assume Jennifer’s on Steve’s side, but she’ll ultimately just want Kayla to be happy.

It sounds like some great scenes are coming up, so stay tuned. Don’t forget to stop by CDL frequently for exciting Days of Our Lives spoilers, updates and news.