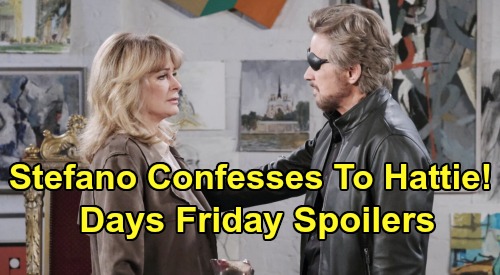 Days of Our Lives (DOOL) spoilers for Friday, February 7, tease that Kristen DiMera (Stacy Haiduk) will face an interrogation. DOOL fans know Chad DiMera (Billy Flynn) recently confronted his sister about her meeting with Stefano DiMera aka “Steve Johnson” (Stephen Nichols), but he could tell Kristen was being cagey. After Abigail DiMera (Kate Mansi) found that portrait of “Steve,” Chad grew even more suspicious.

They’ll try to pry the truth out of Kristen, but she should be hesitant to betray Stefano. Of course, Abigail and Chad’s theory isn’t exactly right. It’s not that Stefano changed his face; he took over “Steve’s” entire body and mind.

Whether Kristen admits the memory mayhem or not, Chad and Abigail will find out the whole ugly story soon enough. Days of Our Lives spoilers say Chad will come face to face with Stefano on Monday, but let’s get back to Friday’s drama.

It turns out Stefano will reveal his true identity to someone else. He’ll come clean to Marlena Evans (Deidre Hall), but she may have a surprise of her own in store.

Closed captions for these latest scenes confirm “Hattie as Marlena” is speaking. That fits with what we’ve seen, which is a very Hattie Adams-ish (Deidre Hall) version of Marlena.

It was more noticeable in the beginning, but the subtle signs are still there. We can’t forget that Hattie has pretended to be Marlena plenty of times, so she’s pulling off a pretty good performance here.

Once “Steve” confesses he’s Stefano, will it lead to “Marlena” revealing herself as Hattie? Regardless, Chad and Abigail should barge in the lair before long.

Days spoilers say the real Marlena will be John Black’s (Drake Hogestyn) hero, so she may be closing in on the Prague dungeon by now. However, Princess Gina Von Amberg aka “Hope Brady” (Kristian Alfonso) will fight for what she wants first.

John hallucinated that Princess Gina was Marlena, which led to some passionate kisses. Days of Our Lives spoilers say Princess Gina will make another bold move on Friday.

Gina will pull out all the stops to make John her man, but that plan’s not going to work out well for her. Princess Gina won’t get the hot hookup she’s counting on.

At Statesville, Will Horton (Chandler Massey) will do his part to help Ben Weston (Robert Scott Wilson). Ben has decided to join Clyde Weston (James Read) for a prison escape, so they’ll need Will’s assistance to make it happen.

Will’s going to put everything on the line to make sure Ben breaks out and has a chance to prove his innocence.

It sounds like another exciting episode’s on the way. We’ll give you updates as other Days news comes in. Stay tuned to DOOL and don’t forget to check CDL often for the latest Days of Our Lives spoilers, updates and news.