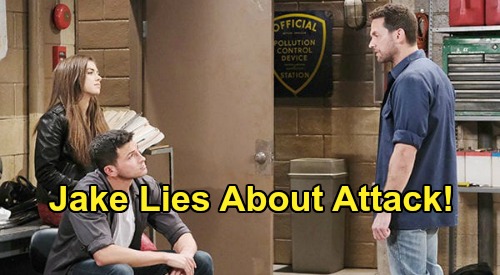 Days of Our Lives (DOOL) spoilers update for Friday, May 8, teases that Xander Kiriakis (Paul Telfer) will visit Victor Kiriakis (Paul Telfer) in the hospital. DOOL fans know Maggie Kiriakis (Suzanne Rogers) put Xander on the spot at Statesville. Maggie insisted she’d find out the truth another way if Xander didn’t come clean, so Xander confessed to the baby swap and brought more pain for Maggie.

Once Maggie realized she killed her own grandchild, she broke down in tears as Xander tried to comfort her. Xander’s really the last person who should be doing that considering what he did.

However, Maggie didn’t have anyone else in that moment, so at least she had some loving arms around her. Despite his many faults, Xander truly does care about Maggie and her well-being.

That’s why it’ll be hard for Xander to come clean to Victor. Protecting Maggie has been Victor’s goal all along – and it’s something Xander wanted to do, too. Their whole plan has fallen apart, so Xander will admit that Maggie knows and hope Victor can understand. It was better for Maggie to hear this from Xander instead of another inmate.

Victor’s still recovering, so he won’t be in any position to lash out. Even so, the look in Victor’s eyes should tell Xander a lot! While Victor fumes, Ciara Brady (Victoria Konefal) will leap into action. She’ll dial 911 and call out Ben Weston’s (Robert Scott Wilson) name until he wakes up.

Thankfully, Ben will just be a bit battered and bruised. He won’t have any serious injuries, but Ciara will still tend to Ben a bit and get the cops over there. Days spoilers say Ciara will want to know who did this to Ben and why.

Over with Eli Grant (Lamon Archey), he’ll blast Lani Price (Sal Stowers) for arranging Kristen DiMera’s (Stacy Haiduk) escape. Lani’s a newly reinstated detective who should be playing by the rules. Eli won’t be pleased that Lani threw the rulebook out the window instead. What’s Eli supposed to do now?

Lani will be sorry Eli’s upset, but she won’t be sorry for helping Kristen make her getaway. It was a difficult choice, but Lani was committed once she made it. She’ll be willing to face the consequences now if that’s how Eli wants to roll. Lani will offer her wrists for handcuffs and suggest Eli could arrest her.

It doesn’t look like Eli will be willing to take that step, but he’ll still be frustrated with Lani for putting hm in this situation. Eli won’t like the idea of covering for Lani, but turning her in seems like a far worse option.

Other Days of Our Lives spoilers say Jeanne Marie (Christine Kellogg Darin) will stop by the Paris apartment again. DOOL viewers will recall that Jeanne Marie thinks Sarah Horton (Linsey Godfrey) is Abigail DiMera (Kate Mansi), so things are already tricky. They’ll get even trickier since Sarah’s got a hostage in there now!

Jeanne Marie probably heard raised voices and wanted to check on “Abigail.” Sarah will try to get rid of Jeanne Marie before she sees Rex Brady (Kyle Lowder) bound and gagged, but she’ll run into some trouble.

Days of Our Lives spoilers say Sarah will manage to avoid disaster, so she’ll have renewed hope about her plan to flee with Rachel DiMera Black.

Of course, Kristen will be final obstacle Sarah faces – and she’ll indeed face Kristen next week! Back at the garage in Salem, Jake Lambert (Brandon Barash) will shut down Gabi DiMera’s (Camila Banus) kiss and reiterate that he’s not Stefan DiMera (Brandon Barash).

Nevertheless, Gabi may think this smooch seals the deal. She suggested that’d tell her if this was really Stefan or not – and we know Gabi will still think this is Stefan in the week ahead. Jake can claim whatever he wants, but that won’t stop Gabi from seeking the real story.

Days spoilers say Jake and Gabi will eventually join Ben, who’ll still be with Ciara. They’ll all talk to Eli, who’ll question Ben and then Jake about the ambush. Jake will act like he has no clue who those baddies were, but Ben will grow suspicious.

Once Eli and Gabi head out, Ben will push Jake to make an admission. Ben will feel like Jake must know what those thugs wanted Jake to hand over.

It sounds like Jake’s mess is getting messier, so stay tuned. As other Days news pops up, we’ll deliver plenty of updates. DOOL fans won’t want to miss all the bombs that are set to drop. CDL’s where you want to be for hot Days of Our Lives spoilers, updates and news.