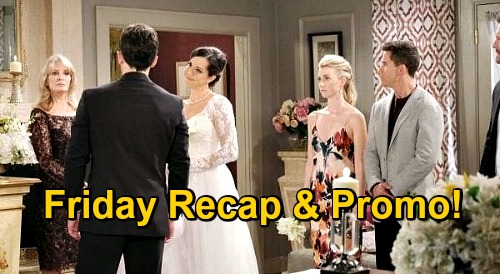 Sarah took off, and inside the apartment, Ava wondered how much longer she could stay in hiding. Philip pointed out that Ava would be on the hook for Kayla Brady’s (Mary Beth Evans) kidnapping if she came out of hiding.

Philip really wanted Ava to leave Salem, but Ava said that she needed to stick around and make sure that Philip delivered what he promised and got rid of Xander Kiriakis (Paul Telfer).

Philip said that he was going to use Sarah against Xander, and that Victor Kiriakis (John Aniston) would eventually fire Xander, freeing him to launder Ava’s money.

At Julie’s Place, Claire Brady (Isabel Durant) asked Charlie Dale (Mike C. Manning) to go to her parents’ wedding with him. Xander interjected that Charlie would love to go, and Charlie agreed.

Claire asked Charlie to meet him at her grandparents’ house, since she had to go help Belle Black (Martha Madison) get ready for the wedding. Claire took off, and Xander gave Charlie a little advice about dealing with Claire’s family.

After Charlie left, Sarah came in and showed Xander the picture she snapped of Ava. Unfortunately, the picture was just a blur, and Xander and Sarah decided to go to the apartment and check things out once the mystery woman left the place.

Over at the penthouse, Shawn and John Black (Drake Hogestyn) had some nice moments together, then Charlie arrived. Shawn and John proceeded to bust Charlie’s chops while Charlie sweated bullets.

Shawn wondered what Charlie’s intentions were with Claire, and he told Charlie that he was a cop and that John was a spy. Charlie was clearly uncomfortable.

At the Salem Inn, Jan Spears (Heather Lindell) acted sweetly to Belle, who just wanted to be rid of her nemesis. Jan cooed that she brought Belle a wedding gift, and Belle said she’d pass, but Jan insisted that Belle open it, and it turned out to be a snake in a can that startled Belle.

Then Jan whipped out a gun and forced her way into the room.

Jan ranted about Belle getting in between her and Shawn and berating Belle for cheating on Shawn more than once. Belle was horrified when Claire knocked on the door.

Jan made Belle answer the door and get rid of Claire, which Belle did by saying that Claire needed to go call Shawn about a special bracelet that she needed for the wedding.

After Belle shut the door, Brady walked up and saw Claire out in the hallway. Claire mentioned that Belle was acting weird, and Brady thought that Belle was probably just nervous and excited.

Back inside Belle’s room, Belle took the opportunity to pounce when Jan turned her back for a moment, and the ladies struggled over the gun.

Back at the penthouse, Claire and Brady arrived and greeted Charlie, who was still sweating over his run-in with Shawn and John earlier. Brady offered his sympathies for Charlie for working at Titan Industries and advised that Charlie stay neutral when it came to Philip and Xander.

Elsewhere in the penthouse, Shawn asked Brady to be best man, which Brady happily accepted.

Later, Claire and Shawn talked briefly. Claire asked Shawn what he thought of Charlie, and Shawn said that nobody was good enough for his Claire Bear. John and Marlena talked, too, with Marlena flashing back to Shawn and Belle’s first wedding when John wasn’t present.

Shawn then got a text from “Belle” saying that she’s parking the car. Everyone got into place for the wedding, and “Belle” showed up outside the door to greet John with her veil down.

John and “Belle” walked inside, and Shawn said that he couldn’t wait to marry her and that he loved her so much. But when he lifted the veil, it was Jan. Everyone was horrified.

Finally, back at Ava’s apartment, Philip left and said goodbye to Ava, who stood in the doorway. Sarah and Xander were hiding around the corner. “Did you recognize her?” Sarah asked. “I couldn’t get a good look,” Xander said. “But her voice sounded kind of familiar.”