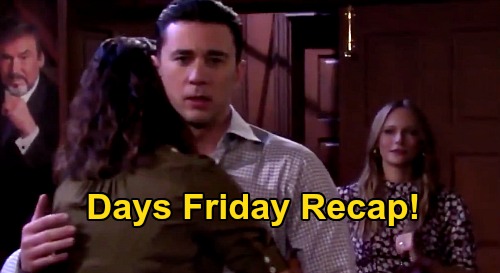 Kate thought that without Gabi here to coach Jake, that Jake didn’t stand a chance, Chad also shared that Jake and Gwen (Emily O’Brien) broke up, and that he told Gwen that she could stay in the mansion.

Kate wondered what was going on between Gwen and Chad, and Chad admitted that they’d kissed, but that it was simply to make Jake jealous.

Talk then turned to Abigail DiMera (Marci Miller), and Chad reported that Abby was getting better. Chad said that Abigail was still having hallucinations, and that they may never go away, but that Abigail was learning to manage them.

Kate asked when Abigail could come home, and Chad said that it would be a couple more months.

Upstairs in his room, Jake drank booze out of a bottle and talked to Stefan DiMera’s (Brandon Barash) suit. Jake griped to himself about Gabi leaving, and he thought that he was stupid to think he had a shot with her.

Gwen arrived and noticed that Jake was drinking. Gwen shared that Chad invited her to stay at the mansion, and Jake shared that Gabi was gone to Mexico.

Gwen was thrilled to hear that that Gabi dumped Jake, and Gwen attempted to reconcile with Jake, but Jake flatly refused. Gwen said that she deserved someone who appreciated her. “Like Chad?” Jake asked sarcastically.

Jake said that Chad was too rich and too married for Gwen. Gwen took off, and Jake finished his booze, then threw the bottle against the wall.

Kate entered the room and asked Jake why he was throwing things, and Jake said, “Because it’s empty.” Kate quipped that there was a bar downstairs and left. Gwen found Chad in the living room and shared that Jake broke up with her for good.

Gwen impulsively hugged Chad, and he sort of leaned away but accepted the hug. As Gwen hugged Chad for the second time, Abigail entered the room and cleared her throat. Chad was stunned, and Abigail said that she was home.

At Lani Price-Grant (Sal Stowers) and Eli Grant’s (Lamon Archey) place, Eli walked in with a surprise sandwich for Lani, and Lani said that she had a surprise also.

Eli noticed that Lani was caring for a young child, and he asked the little girl’s name. “Rachel,” Lani said. “Please tell me this isn’t the Rachel I think it is,” Eli said. Eli then learned that Kristen DiMera (Stacy Haiduk) was in town to support Brady Black (Eric Martsolf), and he was peeved.

Eli fumed that Lani could lose her badge, and he nearly put out an APB on Kristen, but Lani stopped him from doing so. After a considerable amount of back and forth, Eli agreed not to tell anyone about Kristen being back in Salem.

Eli guessed that the Salem PD had bigger fish to fry anyway, with Ciara Weston (Victoria Konefal) missing and Rafe Hernandez (Galen Gering) in Mexico. Eli ended up going back to the station, and he agreed to stay mum about Kristen.

At the Salem Inn, Brady was upset to find Kristen in his room. Kristen asked about how John Black (Drake Hogestyn) was doing, and Brady wondered where Rachel Black was.

Lani said that Rachel was with Lani, and that led Brady and Kristen to argue about the wisdom of Kristen being in Salem. Brady wanted Kristen to go get Rachel and leave Salem now, but Kristen said that she wanted to be here to support Brady.

Kristen finally cajoled Brady into bed for a massage, which eventually led to them making love. Afterwards, Brady thanked Kristen for wanting to be here with him, and Kristen promised that nobody would find out – she promised.

At Steve Johnson (Stephen Nichols) and Kayla Brady’s (Mary Beth Evans) place, they talked about their kids a bit, then they decided to go shower, since Kayla had been working all day and Steve had been sitting vigil with John.

After their shower, Steve and Kayla canoodled in bed and were happy to be reconnecting, while in the living room someone snuck in and looked at a photo of Steve and Kayla that was sitting around.

A short while later, Steve and Kayla got ready to go get some food, when they heard something break out in the living room. Steve went to investigate, and he found a guy in a hoodie picking up the broken picture frame from the floor.

Steve attacked the guy and bellowed, “What are you doing in my house!” The guy said, “Dad, stop, it’s me!” It was Tripp Dalton (Lucas Adams), and Steve was stunned.

That was a terrific episode of Days of Our Lives, and there’s much more coming next week, so stay tuned! We’ll give you updates as more sizzling soap news comes in. Stick with the NBC soap and don’t forget to keep CDL at the ready for the latest Days of Our Lives spoilers, daily episode recaps, and news.