Days of Our Lives Spoilers: Gabi Learns Dr. Rolf Saved Stefan DiMera – How He Pulled It Off and Why Revealed 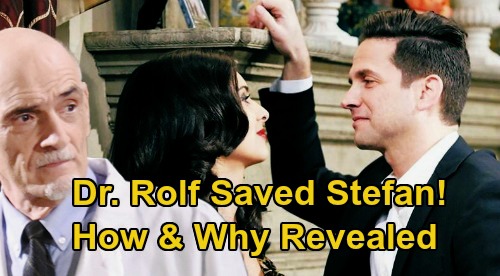 Days of Our Lives (DOOL) spoilers tease that Dr. Wilhelm Rolf (William Utay) must be keeping some huge secrets – ones that should leave Gabi Hernandez (Camila Banus) both relieved and furious. DOOL fans know Dr. Rolf is the brilliant DiMera doctor who can practically perform miracles. Bringing people back from the dead is his specialty!

That’s why it was suspicious when Dr. Rolf claimed he couldn’t save Stefan DiMera (Brandon Barash). Stefan’s brain-dead status shouldn’t have mattered since E.J. DiMera (last played by James Scott) was injected while cold in the morgue. There was absolutely no reason why Stefan couldn’t be saved, so Dr. Rolf must’ve been lying to Gabi.

Since Stefan DiMera is returning to the show this spring, it’s time to start thinking about the circumstances of how he survived. How did Dr. Rolf pull it off? Why did the doc keep it a secret? There are some interesting things to consider as we prepare for the drama Days of Our Lives will deliver.

Stefan’s heart supposedly went to Julie Williams (Susan Seaforth Hayes), but we now know that wasn’t what really happened. However, we also know someone who looked just like Stefan was on the operating table. Sarah Horton (Linsey Godfrey) was part of the medical team in that room, so she confirmed that the man at least appeared to be Stefan.

Days has to do a bit of a rewrite here, but it may not be that hard. After all, Kristen DiMera (Stacy Haiduk) posed as Nicole Walker (Arianne Zucker) for months by wearing a realistic mask.

The person on that operating table may have been wearing one as well. It’s also possible Stefan had a twin or lookalike that was swapped in at the last minute, although it would be tougher to mimic Stefan’s exact injuries.

Regardless, Stefan obviously put a plot in motion behind Gabi’s back. It just doesn’t seem like there’d be any other way for Stefan to make it. Dr. Rolf is Salem’s go-to lifesaver!

Of course, Dr. Rolf may not have been acting alone. Stefano DiMera aka Steve Johnson (Stephen Nichols) or even Vivian Alamain (Louise Sorel) could’ve gotten in on this plot at some point in the story.

Regardless, Days spoilers, updates and news say Gabi will demand answers as this mystery starts to unravel. She’ll eventually find out Stefan is alive and well, so Dr. Rolf will have to explain why he lied and kept quiet. You can bet Gabi will be livid over the time they’ve missed together – especially since it’s doubtful Dr. Rolf will spill the beans himself.

Gabi will probably find out Stefan survived through someone else’s inadvertent discoveries, so she should let Dr. Rolf have it! He deserves it for trying to rob Gabi of her love. The same goes for any accomplices Dr. Rolf might have.

Days of Our Lives spoilers say Gabi will be grateful that Stefan’s living and breathing, but she’ll still want to unleash her wrath!

It sounds like some excitement’s brewing in the coming months, so stay tuned. As other DOOL news emerges, CDL will have some great Days of Our Lives spoilers and updates to pass along.