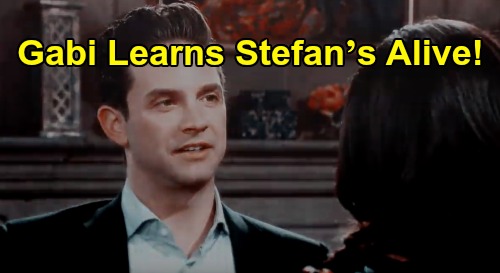 Days of Our Lives (DOOL) spoilers tease that Stefan DiMera (Brandon Beemer) will return to the NBC soap this spring, so that’s certainly something to look forward to. Many DOOL fans were disappointed when Stefan was killed off, but Days is undoing their mistake by bringing Barash back. Based on all the available info and clues, it looks like Barash will indeed reprise the role of Stefan instead of a twin.

Since Stefan’s comeback is getting closer, it’s time to start thinking about what’s in store. Days of Our Lives spoilers say Gabi Hernandez (Camila Banus) is poised for a major downfall beforehand.

Lani Price (Sal Stowers) will inevitably get her revenge, so that’ll leave Gabi in a dark place. It’ll be the perfect time for Stefan to resurface and mend Gabi’s broken heart.

Although it may be a long road back to “Stabi,” they should get there sooner or later. First thing’s first though. Gabi has to realize Stefan’s alive! There’s no word yet on how that’ll happen, but you can bet Gabi will run the emotional gamut over this shocker.

Gabi should be in total disbelief at first since she sobbed over Stefan’s body and ultimately gave away what she thought was his heart.

Gabi became obsessed with avenging Stefan’s death, but he isn’t dead at all. Someone else’s heart must’ve gone to Julie Williams (Susan Seaforth Hayes), so this whole pacemaker plot was a waste of Gabi’s time. She’s made Lani’s life total misery when there was no real reason to.

That’ll be a lot for Gabi to wrap her head around, especially since she’ll end up causing so much pain for herself. However, Gabi will mostly just be relieved once she gets past the shock and confusion.

Gani will be glad she still has a future with Stefan, but not so fast! Days of Our Lives may not make it quite that easy.

If Stefan has amnesia as many back-from-the-dead characters often do, that’ll be another hurdle for Gabi. She may have to fight for love, but it’s just exciting that “Stabi’s” love story can continue. The angst should bring some great material in the months ahead.

It sounds like Gabi’s not-so-dead husband will shake things up in a big way! Are you eager for Gabi to find out about Stefan’s survival? We’ll give you updates as other Days news comes in. Stay tuned to DOOL and don’t forget to check CDL often for the latest Days of Our Lives spoilers, updates and news.