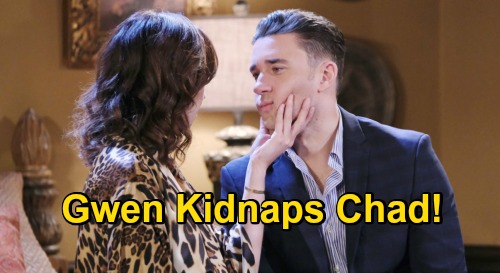 Days of Our Lives (DOOL) spoilers tease that all of Gwen Rizczech’s (Emily O’Brien) scheming will be leading up to a big moment. As viewers are aware, Gwen has managed to cause real trouble in Abigail DiMera’s (Marci Miller) relationship with her dad Jack Deveraux (Matthew Ashford), as well as in Jack’s relationship with Jennifer Deveraux (Cady McClain).

And now, Gwen has set her sights on ruining Abigail’s relationship with Chad DiMera (Billy Flynn).

Gwen has told Wilhelm Rolf (William Utay) that she wants to take everything that Abigail has from her, which would include Chad. Gwen’s already planted seeds of doubt in Chad’s head, making him suspect that Jake DiMera (Brandon Barash) and Abigail were having an affair.

And if that’s not bad enough, it looks like Gwen is going to try to move in on Chad when he’s in a vulnerable state.

But of course, Chad’s very much a one-woman man, and he only has eyes for Abigail. Days of Our Lives spoilers indicate that Gwen’s going to go nuclear in her plan to separate Abigail and Chad, to the point where she may actually kidnap Chad and hold him against his will.

And it looks like this will all go down on New Year’s Eve, as DOOL spoilers for that day say that Gwen will lure Chad into her trap.

This will also be the day that Abigail and Anna DiMera (Leann Hunley) find some incriminating evidence against Gwen in Gwen’s bedroom. It looks like Anna will spearhead this effort, as she’ll be very suspicious of Gwen and her motives.

Then on Friday, January 1, Anna will share her suspicions about Gwen with Jack, while Abigail makes a startling discovery – Chad will be missing in action!

Indeed, Days of Our Lives spoilers for New Year’s Day say that Abigail will search for a missing Chad. And this sounds very much like Gwen will be holding Chad captive somewhere – after all, Chad wouldn’t willingly go missing from the mansion on such a big holiday and worry Abigail and the kids like this.

Might Gwen drug Chad and keep him against his will as part of the grand finale of her big plans for Abigail?

We’ll see what happens here, but it does seem that all of Gwen’s scheming will be leading to this moment. Perhaps Gwen will have Chad at some secret laboratory of Rolf’s, and with Rolf’s help, and who knows what could happen to Chad.

Gwen might even try to finagle it to have Abigail find her and Chad in what looks like a compromising position! Whatever the case, it seems that something big is going to go down.

It appears that we’re in for some exciting scenes as Chad could be in real trouble thanks to Gwen. Do you think that Gwen will hold Chad against his will as part of her plot to ruin Abigail’s life?

Stay tuned to the NBC soap and remember to keep CDL at the ready so you don’t miss any of the latest sizzling Days of Our Lives spoilers, updates, or news. Check out our daily episode recaps, too!