BY hellodrdavis on January 31, 2020 | Comments: one comment
Related : Days of Our Lives, Soap Opera, Spoiler, Television 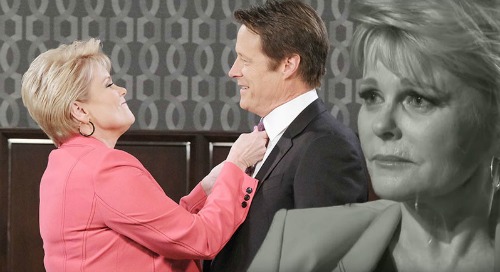 Days of Our Lives (DOOL) spoilers has some news to pass on about a recent issue that had some fans up in arms. As DOOL fans know, the week of January 20-24 was almost exclusively a week of flashbacks that took place on Mother’s Day of last year. It was a big week, and a lot happened on the NBC soap.

Specifically, several things were explained for DOOL viewers, including what happened leading up to the accident that claimed Adrienne Kiriakis’ (Judi Evans) life, and how Xander Kiriakis (Paul Telfer) and Victor Kiriakis (John Aniston) conspired to (a) frame Will Horton (Chandler Massey) for the accident and (b) switch babies in the hospital.

It was a lot to take in for one week, and fans were glad to see some resolution to their burning questions that have been building for the past several weeks, since the time jump occurred in November 2019. It’s what loads of fans were waiting for.

But something didn’t occur during the flashback week that has left a lot of DOOL fans wondering what TPTB were thinking. Pictures had circulated in the promotional materials for DOOL showing a scene where Jack Deveraux (Matthew Ashford) tearfully approached Adrienne’s lifeless body in the hospital after her death. Fans were banking on seeing Jack bid an emotional goodbye to Adrienne.

The scene also included the appearance of Abigail DiMera (Kate Mansi), who came in the room after Jack’s goodbye to Adrienne and held her father as the sobbed. It was bound to be a difficult, but important, scene, as Jack and Adrienne were close siblings with a legacy history on the show.

However, the scene never aired, and DOOL fans noticed. Social media was suddenly abuzz with a flurry of fan posts wondering exactly what happened to that scene. Fans quickly surmised that the scene must have been cut at the last minute, and they quickly expressed their outrage and disappointment all over social media. There are definitely lots of Jack and Adrienne fans out there, and they let their voice be heard!

Well, after some time had passed, Days of Our Lives Head Writer Ron Carlivati posted a photo of the scene description from the official script for the scene, along with the following tweet: “Sorry to hear this scene of Jack saying goodbye to Adrienne was cut from Friday’s show…” You can see the tweet, and the script snippet, below. It’s pretty clear from the snippet that it would have been a moving scene.

In response to Ron Carlivati’s tweet, fans spoke their minds about the show’s decision to cut this crucial scene. One fan replied: “Thanks for sharing Ron. The #JnJ fans and overall #Days audience was looking so forward to seeing this scene. It’s an atrocity it was cut. The Johnsons have always been a favorite sibling relationship, and what a total shame we didn’t get to see Jack say goodbye to his sister.”

Other fans suggested that the scene could be put on the DOOL app for viewers to see. For example, one fan commented: “Thank you for sharing! This sounds like such a heart breaking scene. I wish it wasn’t cut. Is there any chance it will be posted on the DOOL app?”

And another DOOL fan said: “How disappointing…one of the longest, sweetest relationships on the show. Maybe put it on the app? The fans that have loved the Johnson family for over 30 years would love to see it.”

At any rate, for fans who were wondering what happened to the Jack and Adrienne scene that was promoted, you now have your answer. But at least we now know what that scene would have entailed had it aired. Did you miss seeing the scene where Jack tells Adrienne goodbye? Stay tuned to DOOL and don’t forget to check CDL often for the latest Days of Our Lives spoilers, updates, and news.

Sorry to hear this scene of Jack saying goodbye to Adrienne was cut from Friday’s show… #days pic.twitter.com/BKfUlnN6rR