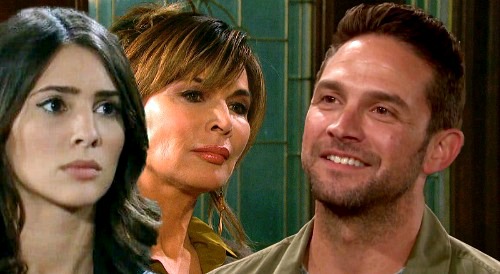 Days of Our Lives (DOOL) spoilers tease that Jake DiMera (Brandon Barash) seems to have had a good thing going with Kate DiMera (Lauren Koslow) lately, although there’s certainly some problems brewing in that relationship.

For starters, Gwen Rizczech (Emily O’Brien) knows about Jake and Kate’s involvement with each other, and she’s making their lives difficult.

As viewers know, Gwen basically stole Jake’s Christmas present for Kate by forcing Jake to lie and say in front of the entire family that he bought the gift for her. Jake basically had no choice, since Kate is adamant that she doesn’t want anyone to know about their affair, especially Chad DiMera (Billy Flynn).

Jake stepped up to protect Kate from everyone finding out about their affair, and in doing so he had to fork the bracelet over to scheming Gwen.

Well, something tells us that this whole business about keeping the affair a secret is going to start to really get on Jake’s nerves. After all, the reason that Kate wants to keep things under wraps is because of Chad, and that’s bound to irritate Jake after a while.

Jake and Chad absolutely do not get along, and Jake’s probably going to start to resent keeping his relationship with Kate a secret, as if there was something wrong with what they are doing.

As far as Jake’s concerned, he really likes and admires Kate, and he’s got real feelings for her. But it’s probably only a matter of time before Jake realizes that Kate doesn’t reciprocate the feelings at the same level as he does.

Indeed, Days of Our Lives spoilers say that Jake and Kate will soon have a big falling out, and we suspect that it will probably have everything to do with this business of keeping their relationship a secret from Chad.

Of course, at some point, Gabi Dimera (Camila Banus) is going to come back into the picture, and perhaps it will be Jake’s breakup with Kate that will precipitate Gabi’s return to Salem.

Jake might realize after getting his heart shattered by Kate that he actually had something meaningful with Gabi that should be explored. Maybe Jake will even reach out to Gabi once Kate’s out of the picture.

One way or another, it seems that the future is going to be all about Jake and Gabi getting together. Jake really deserves better than sneaking around with Kate and not being open about the relationship, but the question will be whether Gabi will take Jake back given how she found him in bed with Kate.

That had to be quite jarring for Gabi, and she’ll probably want to make sure that Jake has Kate out of his system, and that he seriously wants her and only her.

We’ll see what happens here, but something’s going to bring Gabi back to Salem, and we suspect that it could be Jake! Do you think that Jake will seek Gabi out after his falling out with Kate?

Stay tuned to the NBC soap and we’ll keep you up to speed on the latest soap news and spoilers. Remember, CDL is your go-to place for hot new Days of Our Lives updates and daily episode recaps.