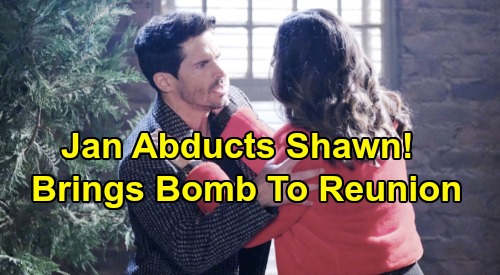 Days of Our Lives spoilers recap for “Last Blast Reunion” Chapter 1 Episode 7, tease that Jan Spears (Heather Lindell) was shown in a dark room in the warehouse district sitting with her computer. She was finishing a script, which presumably left off from when Shawn Brady (Brandon Beemer) found Belle Black (Martha Madison) dead in her hotel room. She then asked someone what he thought of her script, and whether it was too bloody.

The camera panned to the bed, where Shawn was laying all tied up and captive. Shawn said that he thought she was crazy and asked her what she wanted. She responded that she just wanted to be one of the cool kids again. She lamented that the Last Blast group threw a party and that she wasn’t invited. Shawn promptly responded that they all thought she was in a coma, and she replied that she could have stayed home and cried but instead decided to crash the party.

Jan then flashed back to the night of the Last Blast reunion, when Shawn went out to get more beer for the group. Turns out, Jan was arriving to the party when Shawn exited, and she caught him outside. Shawn was stunned to see her, and she quickly disabled him by plunging a syringe into his neck.

Back in the present, Jan and Shawn talked about the summer back in the early 2000s when she kidnapped him and held him at a cabin all summer. Jan then started kissing him and unbuckling his pants as Shawn yelled at her to stop it.

Meanwhile, at the Last Blast reunion, Belle called Shawn to find out where he was, since he had been gone for too long. Belle was clearly worried about him after not being able to reach him, then Chloe Lane (Nadia Bjorlin) distracted her and she went to talk with Chloe and Phillip Kiriakis (Jay Kenneth Johnson).

At the warehouse, Jan noticed that Belle had tried to call Shawn, and she took his phone and texted Belle back that he was ok and on his way back. Jan then rambled about how she wrote the script, which included her killing everyone, to help her process her anger. She pulled out a knife and said that as long as Belle was alive, she didn’t stand a chance with Shawn.

Shawn, upset, begged Jan to let him go. Jan rambled some more about de-stressing, and she revealed that she had baked a cake for the reunion along with a special filling. Shawn quickly realized that Jan had put a bomb inside the cake, and he reeled with anger and horror. Jan left with the cake.

Back at the reunion, Chloe and Belle reminisced about old times, then Chloe mentioned to Phillip that it looked like he was still trying to steal Belle from Shawn. Phillip said that he was thinking about rekindling a flame, but that he was interested in someone else. Just then, Jan walked in and shocked everyone with her presence.

Jan presented her cake to the group, and everyone gathered around to see what the cake said. Jan announced that it said “A last blast for the Last Blast crew.” As everyone inched closer to the cake, ominous music played, and the screen faded to black as a terrible explosion was heard.