BY hellodrdavis on January 21, 2020 | Comments: one comment
Related : Days of Our Lives, Soap Opera, Spoiler, Television 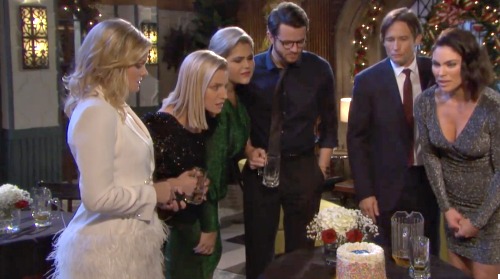 Days of Our Lives spoilers recap for “Last Blast Reunion” Finale, Chapter 1 Episode 8 reveal that Shawn Brady (Brandon Beemer) struggled to free himself from the bed in the warehouse where Jan Spears (Heather Lindell) had left him. Knowing that Jan had gone to the Last Blast reunion with a bomb inside a cake, he worried about Belle Black (Martha Madison) and the others.

Meanwhile, at the cafe, Belle grew frustrated as she tried unsuccessfully to reach Shawn by phone. Knife in hand, Jan announced that she wasn’t staying to have cake with the rest of the group, as Phillip Kiriakis (Jay Kenneth Johnson) tasted some of the frosting. Jan noted that if he liked the frosting, he’d really like what was inside the cake.

Again, Jan insisted that she couldn’t stay, and that nobody really wanted her to – after all, they did some pretty terrible things to each other back in high school. She claimed that the cake was her way of trying to make amends, but then the cake started beeping and everyone wondered why.

Jan then revealed that she was holding a detonator for the bomb that she had put in the cake. Chloe Lane (Nadia Bjorlin) picked up a knife and started to go after Jan, but Jan told “ghoul girl” to put it down and that this was no joke. Susan Adamson (Lindsay Hollistar) wondered why Jan would do something like this, and Jan snarked at the group and pointed out that Mimi Lockhart (Teresa Liane) was responsible for her coma.

Jan then moved toward the door, announcing that she was going to blow everyone up as soon as she walked out, when suddenly Jason Welles (Aaron Van Wagner) burst in the door, startling Jan and giving Phillip an opportunity to rush Jan. A big tussle ensued as Jan was effectively overpowered.

Later, Belle rushed in the warehouse where Shawn was being held. Shawn was overjoyed to see her, and Belle quickly told him that they had stopped Jan. Belle then noticed how cute Shawn looked all tied up, and she shut off the light and said that she could untie Shawn, but she’d rather do something else. They kissed and Shawn jokingly said that she was crazy.

Back at the cafe, the group (minus Jan) joked about the near disaster. Jason remarked that it was good that he came in when he did, and that Phillip overpowered Jan. Kevin Lambert (Chadwick Hopson) then made a beer run to the corner store, and Chloe and Phillip made plans to go dancing tomorrow night.

Viewers then saw some nice flashbacks of Chloe and Phillip in high school dancing, and finally the group toasted to the Last Blast crew. Did you enjoy Chapter 1 of the digital Last Blast series? Stick with the NBC soap and don’t forget to check CDL often for the latest Days of Our Lives spoilers, updates, and news.