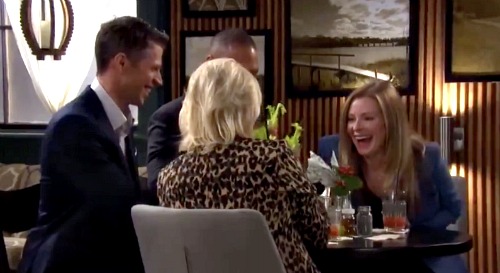 Days of Our Lives (DOOL) spoilers tease that Jennifer Deveraux (Cady McClain) is really hurting right now. As viewers are aware, it was a real blow when Jennifer found out that Jack Deveraux (Matthew Ashford) had a one-night stand with Kate DiMera (Lauren Koslow) during the year that she was in a coma. Jennifer is completely distraught right now, but after some time goes by, it looks like she might actually consider taking Jack back.

However, that’s not to say that Jennifer won’t want to put Jack through some serious hoops first. The new Days of Our Lives winter preview video shows an interesting scene involving Jennifer trying her hardest to make Jack jealous, and she’s getting some help from Bonnie Lockhart (Judi Evans) to do so.

The preview shows Jennifer and Bonnie whooping it up and laughing boisterously with two random men at Julie’s Place as they swig Bloody Marys together and appear to be having a great time with their new beaus. Something tells us that the whole thing will be Bonnie’s big idea, but Jennifer will really be going along with it

According to Days of Our Lives spoilers, this will be a deliberate attempt on Jennifer and Bonnie’s part to make both Jack and Justin Kiriakis (Wally Kurth) jealous.

As DOOL viewers know, Bonnie has made it very clear to Justin that she’s interested in him romantically, but Justin has balked at the idea of a romance with the woman who hurt Adrienne Kiriakis (Judi Evans) so badly.

Still, viewers know that Justin likes Bonnie deep down. When Bonnie gave Justin a cowboy hat a while back, Justin blustered about it not being “him” and not liking the thing.

But then, in private, Justin donned the hat and admired himself in the mirror with it on. This seems to be how Justin feels about Bonnie, too – he sort of likes her despite himself.

Well, it should be fun to watch Jennifer and Bonnie get together and scheme against Jack and Justin a little bit. Let’s face it, Jack deserves to be messed with a bit, and so does Justin, since he’s been so gruff with Bonnie in the recent past.

So good for Bonnie and Jennifer for doing a little scheming and forcing Jack and Justin to witness them having fun with some other men!

As for Jack, he’ll probably wonder if he’s losing Jennifer for good and if this is sign that she’s moving on without him. And for Justin, he’ll probably worry that perhaps Bonnie is interested in someone else, making him realize that he really does like Bonnie after all.

There should be some humorous moments here, which will be fun for viewers.

Stay tuned to the NBC soap and don’t forget to keep CDL at the ready for all your Days of Our Lives spoilers, updates, and news. We’ve got you covered!