Days of Our Lives Spoilers: Judi Evans Back as Bonnie – Stuns Justin & Jack, Tries To Make Amends With Lucas 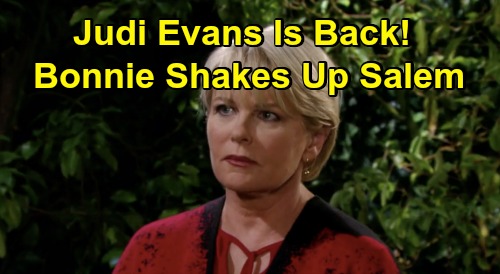 Days of Our Lives (DOOL) spoilers tease that it’s time for another fan-favorite return. Bonnie Lockhart (Judi Evans) will be returning to the Salem scene later this week, and in typical Bonnie style, she’ll be shaking things up wherever she goes. As DOOL viewers know, Judi Evans filmed these scenes as Bonnie long before her tragic horseback riding accident this past spring. Judi went through a terrible ordeal, suffering serious injuries, then dealing with blood clots and COVID-19.

Well, when Bonnie does return to Salem, it will apparently be after her big book tour. DOOL viewers will remember that Bonnie was in prison with Hattie Adams (Deidre Hall), but then was released and she wrote a highly successful book and went on tour.

And of course, who can forget that Bonnie previously was part of the whole “Baby Bonnie” scam in which Lucas Horton (Bryan Dattilo) was led to believe that Mimi Lockhart’s (Farah Fath) baby was actually his baby with Bonnie. What a mess.

It appears that viewers will first see Bonnie on Wednesday, July 8th, when Justin Kiriakis (Wally Kurth) is at Adrienne Kiriakis’ (Judi Evans) gravesite. Justin will be reeling from his called-off wedding to Kayla Brady (Mary Beth Evans), and he’ll be trying to get some comfort from Adrienne’s spirit when along will come Bonnie, looking very Adrienne-like in a smoothed-down, short haircut.

Justin will be stunned, but he’ll quickly realize that this is Bonnie standing in front of him, not Adrienne.

Bonnie will also totally stun another key Salem resident when she bumps into Adrienne’s brother Jack Deveraux (Matthew Ashford). It seems that Jack will be amazed when he runs into Bonnie, who looks like, but doesn’t at all act like, his dead sister.

Of course, Jack may get quite a jolt, since he could at first assume that this is Adrienne who’s been brought back from the dead – which isn’t too big of a stretch in Salem, given that Wilhelm Rolf (William Utay) was running around free not too long ago.

Something tells us that Lucas isn’t going to be too keen to forgive Bonnie just like that – after all, she did lead him to believe that “Baby Bonnie” was his daughter, and Lucas was even seeking custody of the kid for a while.

Lucas probably won’t be quick to accept Bonnie’s apology, but perhaps Bonnie has turned over a new leaf. We might even see a kinder, gentler, and less flamboyant Bonnie this time around. And will Bonnie be after a relationship with Lucas, or will she set her sights on someone else in Salem?

Bonnie always seems to have an angle and a plan, and she’s going to need a friend or two, so who will emerge to befriend her? Hattie’s gone, and Bonnie tends to alienate people, so it will be interesting to see who she ended up engaging with in Salem.

Who knows – she could wind up becoming friendly with Roman Brady (Josh Taylor). Roman certainly needs a good love interest at this point, so you never know!

We’re looking forward to seeing what kind of trouble Bonnie gets into this time around – are you? Stay tuned to Days of Our Lives and don’t forget to check back with CDL so you don’t miss any of the latest Days of Our Lives spoilers, updates, and news. We’ve got your daily DOOL recaps as well!