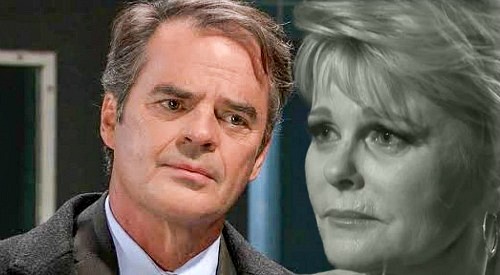 Days of Our Lives (DOOL) spoilers tease that total heartbreak is on the way. During the week of January 20-24, DOOL fans will learn the full story behind Adrienne Kiriakis’ (Judi Evans) death. Viewers will see the details of what really happened along with the tragic aftermath that followed.

Of course, Days has already shown a few brief flashbacks, but the episodes ahead will take a deep dive into what actually happened to Adrienne and how everyone responded. We saw the crushing moment when Justin learned Adrienne was dead, but an even more crushing one is set to play out onscreen.

In these new time jump flashbacks, Days of Our Lives spoilers state that Justin says goodbye to the wife he adored. This certainly isn’t how Justin imagined he’d be spending the last moments of Mother’s Day. He would’ve rather kept celebrating the beautiful family he created with Adrienne.

Instead, Justin finds himself standing over Adrienne’s dead body. Days will flash back to Justin sobbing over the corpse and trying to make peace with this somehow. Justin struggles along with Jack Deveraux (Matthew Ashford), who’s getting his own flashback goodbye scene.

Jack bids his sister an emotional farewell, which was made even more emotional by the fact that Jennifer Horton (Melissa Reeves) was still in a coma at the time. Jack must’ve felt like his world was falling apart. Between not knowing if Jenn would wake up and knowing for sure Adrienne wouldn’t, it had to be a lot for Jack to take in.

There’s also the matter of Will Horton’s (Chandler Massey) difficult confession. This confession hits Sonny Kiriakis (Freddie Smith) hard. We should see Sonny’s challenging farewell scenes with Adrienne as he tries to come to grips with what Will did.

Fans thankfully know Will’s innocent, but that should make these upcoming scenes even more devastating to watch! On the bright side, the truth about Will’s setup should come out sooner or later. That gives “WilSon” hope for some light at the end of all this darkness.

It sounds like some gripping material’s coming up. We’ll give you updates as other Days news emerges. Stay tuned to DOOL and don’t forget to check CDL often for the latest Days of Our Lives spoilers, updates and new.