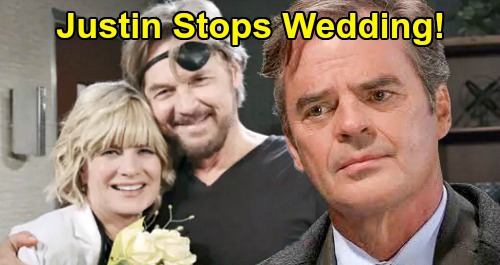 Justin’s set to marry Kayla during the week of July 6-10, so this Steve news will naturally send him into a tailspin. Days spoilers say Justin will push Hope to admit what he overheard was true.

When pressed, Hope will confess that Steve indeed wants to reunite with Kayla. Steve’s just trying to keep his distance and respect the boundaries of her new relationship.

Justin will struggle over what to do since his wedding’s happening soon. Kayla will be a beautiful bride on her big day, but the nuptials won’t go as planned. Days of Our Lives spoilers say Justin will derail his own ceremony.

In the end, Justin just won’t be able to go through with this knowing what’s in Steve’s heart. Deep down, Justin will know Kayla wants Steve back, too.

Days of Our Lives spoilers say Justin will fill Kayla in on Steve’s feelings, which Jennifer and Jack Deveraux (Matthew Ashford) will confirm. Justin won’t want to marry Kayla since he’d be standing in the way of true love.

As you can imagine, Kayla will be beyond overwhelmed over Justin’s wedding surprise. After Justin updates Kayla on everything, the look in her eyes will tell him all he needs to know.

Justin will let Kayla go and hope “Stayla” can find happiness again. DOOL fans know Steve is Kayla’s soulmate – just like Adrienne Kiriakis (Judi Evans) was Justin’s soulmate before she died. Heartbroken Justin’s in for a shock when he sees Bonnie Lockhart (Judi Evans) in the cemetery later and mistakes her for Adrienne!

As for Steve and Kayla, there’ll be a bit more drama as they work to get their romance back on track. We’ll give you updates as other DOOL details pop up. Days spoilers say some wild moments are in store, so don’t miss all the action. CDL will have lots of other Days of Our Lives spoilers, updates and news to read up on.