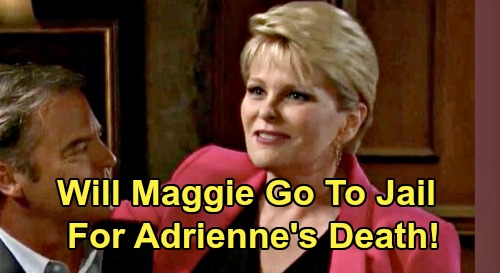 Days of Our Lives (DOOL) spoilers tease that Will Horton’s (Chandler Massey) luck will ultimately turn around. DOOL viewers know Will’s had a rough time since Adrienne Kiriakis (Judi Evans) died. He took responsibility for accidentally killing Adrienne, but a major twist will change everything.

Will is innocent, so he’ll eventually get out of prison and have a chance to reunite with Sonny Kiriakis (Freddie Smith).

Sonny and Will still love each other, but Will feels there’s no hope for their future. He’s stuck behind bars and believes he’s the reason Sonny lost his mom. It’s easy to see why Will threw in the towel here.

Evan Frears (Brock Kelly) won’t be much of an obstacle to “WilSon’s” reunion in the end. Once Will’s proven innocent, it probably won’t take long for Will and Sonny to get back on track.

However, that still leaves the question of what’ll happen to the real culprit. Days of Our Lives spoilers say Maggie Kiriakis (Suzanne Rogers) is actually responsible for Adrienne’s death. She inadvertently killed Adrienne while drunk, so Victor Kiriakis (John Aniston) and Xander Kiriakis (Paul Telfer) covered it up.

After the truth is exposed, will Maggie be thrown in the slammer – at least for a while?

There’s no word yet on exactly how this accident went down, but Maggie likely would’ve gone to prison if it hadn’t been for the cover-up. If Will did jail time, shouldn’t Maggie?

Days fans recall Eric Brady (Greg Vaughan) was also locked up for accidentally killing Daniel Jonas (Shawn Christian) while drunk. It’s only fair that Maggie should pay the price for her actions, too.

Of course, Maggie shouldn’t stay in prison forever, but some consequences seem appropriate. She currently has no memory of killing Adrienne, but that doesn’t change the fact that she’s guilty.

Adrienne is DEAD because of Maggie. This is Salem, so Adrienne could certainly return one day. However, she’s permanently in the grave as far as Salemites are concerned.

There’s also the matter of Victor and Xander’s criminal behavior. They let poor Will think he killed Adrienne and made sure he went down for it instead of Maggie. Xander and Victor could face charges if their part in all this is publicly revealed.

Nevertheless, DOOL can’t have everybody locked up for too long, so they’ll hopefully resolve things quickly and let everyone move on. Days of Our Lives spoilers say it’ll be interesting to see how it all plays out!

We’ll give you updates as other Days news comes in. Stay tuned to the NBC soap and don’t forget to check CDL often for the latest Days of Our Lives spoilers, updates and news.