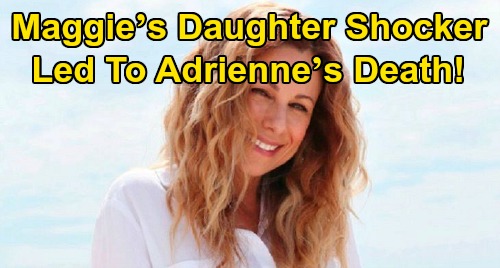 Days of Our Lives (DOOL) spoilers tease that a shocking return is on the way – and we do mean shocking! During the week of January 20-24, Marie Wilson will pop up as Summer Townsend. If that name doesn’t ring a bell, it’s not surprising. Ever since Summer’s exit, Days writers have basically pretended this short-lived character never existed.

Of course, that wasn’t really a bad thing considering what a total train wreck Summer was. Days of Our Lives introduced Summer back in 2016 after Brady’s heart transplant. Daniel Jonas’ (Shawn Christian) ticker brought some strange dreams, which led Brady to a beach where he pulled suicidal Summer out of the ocean.

Summer came to Salem, where it was confirmed that she was Daniel’s sister. Maggie Kiriakis (Suzanne Rogers) lied about the real story of Summer’s birth, but she later admitted she willingly gave Summer up for adoption.

Summer had some serious mental issues and a penchant for running con jobs. There was even that ex-con friend of hers, Clark Benard (Josh Burrow), who suffered death by nightstand!

Clark was killed after a blow to the head, so Dario Hernandez (Jordi Vilasuso) helped Summer get rid of the body. After Summer was accused of kidnapping Tate Black, she faced off with Theresa Donovan (Jen Lilley) – which led to another head injury.

Summer ultimately bid Maggie an emotional farewell as she fled town, so this was one crazy character with a story that most fans were eager to forget.

That’s why it’s pretty bizarre that Days chose to bring this character back. It seemed like they wanted to erase Summer from the history books, but that could actually be an important point.

It turns out Summer resurfaced just before Adrienne Kiraikis’ (Judi Evans) death. She’s a crucial piece of the puzzle since she caused Maggie to fall off the wagon.

Days of Our Lives flashbacks will reveal that Maggie got a disturbing visit from Summer. Did Summer show up ranting about how Maggie ruined her life?

Did she guilt-trip Maggie for not being there for her? Summer may feel like Maggie wanted to act like she was never born – much like Days did for quite some time.

Whatever the case, Days of Our Lives spoilers state Maggie went on a drinking binge after this visit from Summer. Maggie’s drunkenness led to a horrific accident involving Adrienne and Sarah Horton (Linsey Godfrey), which Will Horton (Chandler Massey) was framed for.

In other words, this forgotten character of the past will suddenly turn Maggie’s world upside down. Summer will change lives forever, so don’t miss what she has to say!