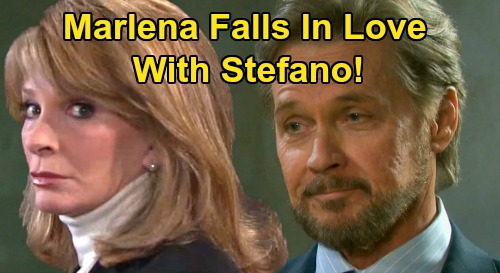 Stefano was adamant about wanting the real Marlena and not some robot impersonation, which Dr. Rolf respects and understands. However, he knows Stefano will be facing an uphill battle.

Marlena has resisted Stefano’s charms in the past, so there’s no reason to think she’d cave in now – particularly when Stefano’s stolen Steve’s mind and body.

As a result, Dr. Rolf pointed out that he could deliver an authentic yet tweaked version of Marlena. She’d just be a tad more receptive to Stefano’s advances and those charms we mentioned.

Stefano seemed intrigued by the notion, so this plan will move forward soon enough. Days spoilers say Marlena will be kidnapped, which will leave her vulnerable to Dr. Rolf’s crazy procedure.

Once Marlena gets updates on Stefano’s scheme, she’ll naturally fight against it. This is mind control, plain and simple. Dr. Rolf can act like he’s making minor adjustments to Marlena’s personality, but they could be major enough to make her fall for Stefano. That’s a pretty massive change if you ask us!

Days of Our Lives spoilers say Marlena won’t be down for this brainwashing at all. She’ll try to wiggle out of it during the week of March 9-13, but it’ll be no use.

Dr. Rolf will be under Stefano’s strict orders, so there won’t be anything Marlena can say that’ll stop this procedure. Stefano will fully expect to get his “Queen of the Night.”

After the transformation’s complete, Stefano will test the waters. He’ll be eager to see if Dr. Rolf really made Marlena more inclined to fall for him. Days of Our Lives spoilers say Stefano will attempt to form a bond with Marlena.

Will Marlena be tempted or could the power of her love for John Black (Drake Hogestyn) get in the way? It could be a bit of both as this storyline heats up!

Days spoilers say some shockers and shakeups are brewing, so don’t miss what’s ahead on the NBC soap. CDL will have lots of DOOL updates as other news emerges. Be sure to stop by often for other hot Days of Our Lives spoilers posts.