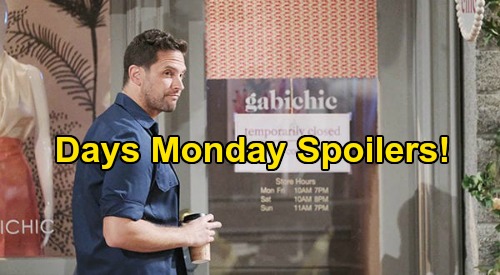 Days of Our Lives (DOOL) spoilers for Monday, April 27, tease that Ben Weston (Robert Scott Wilson) will reel over the mechanic he’s just encountered. Ben headed to the auto garage to apply for a job, but he got a shock instead. Someone who looks just like Stefan DiMera (Brandon Barash) is right in front of him, so Ben will marvel at just how much this guy looks like his dead friend and former employer.

Jake Lambert (Brandon Barash) will introduce himself, but Ben will have a hard time focusing on much besides his face. However, Ben will ultimately pitch himself as a candidate for the open mechanic position.

Days of Our Lives spoilers say Jake will eventually decide to give Ben a shot, so that’s great news. It’ll keep Ben in Jake’s orbit as this DOOL storyline heats up.

Meanwhile, Gabi DiMera (Camila Banus) will run into Will Horton (Chandler Massey) and explain her unsettling vision of Stefan. Gabi saw Stefan’s reflection looking back at her, so she’ll continue to struggle with how much she missed him and their life together.

Days spoilers say Will will offer Gabi some support as she works through this reflection drama and tries to look to the future.

Afterward it seems Gabi will just miss seeing Jake in the town square. There’ll be a close call as Days of Our Lives builds to Gabi’s face-to-face encounter with Jake later this week. DOOL fans won’t want to loss that long-awaited moment!

Over with Brady Black (Eric Martsolf), he’ll realize he needs to clean up Kristen DiMera’s (Stacy Haiduk) mess. As soon as Brady got the call about Victor Kiriakis’ (John Aniston) stabbing and informed Kristen, the look in her eyes told him everything he needed to know.

Once Kristen confirms that she plunged the knife, she’ll start to spin out and leave Brady desperate to fix this.

Despite the horror of it all, Brady won’t blame Kristen for going after Victor. This was an extreme reaction, but Kristen has been pushed to her limit. Part of Brady wanted to kill Victor himself when he found out about Vic’s involvement in the baby swap.

Since Brady won’t want Kristen to go down for this, he’ll return to the scene of the crime and try to get rid of the evidence.

Unfortunately, Brady’s timing will be terrible! Right after Brady picks up the bloody knife, Eli Grant (Lamon Archey) and Lani Price (Sal Stowers) will arrive. Brady will claim he just wanted to check the place out and see what went down, but Lani and Eli won’t buy it. They’ll take Brady back to the Salem PD to grill him about Victor’s attempted murder.

Kristen will be in panic mode when she realizes Brady’s in trouble over her actions. When Kristen argues that Brady’s innocent, Eli will wonder how she knows that. Brady will determine that to protect Kristen, he has no choice but to take the fall.

Days spoilers say Brady will lie that he stabbed Victor, so that’ll add to “Bristen’s” complicated woes. Finally, Abigail DiMera (Kate Mansi) will struggle to make sense of what she just saw.

When Abigail looked up at Chad DiMera (Billy Flynn), she had a hallucination of Ben looking menacing with a necktie. Abigail will be terrified since she has a history of mental illness and doesn’t want to sink back into a dark place.

Gabi resolved to plot against Abigail and Chad, but there’s likely a bit of misdirection going on here. It’ll soon be revealed that Abigail was drugged, but it’s doubtful Gabi was the culprit. Days has a deeper mystery in mind, so stay tuned for updates on how it’ll unravel. CDL’s the place to be for sizzling Days of Our Lives spoilers, updates and news posts.