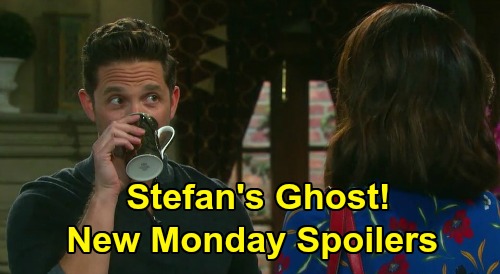 Days of Our Lives (DOOL) spoilers update for Monday, April 27, teases that Brady Black (Eric Martsolf) will resolve to protect Kristen DiMera (Stacy Haiduk) by any means necessary. Brady already assumes Kristen must’ve been the one to stab Victor Kiriakis (John Aniston), so Kristen won’t deny it. Once Kristen starts reeling over potentially going to prison, Brady will try to calm her down.

Brady has every intention of reuniting Kristen with Rachel DiMera Black, so he doesn’t want her behind bars when that reunion happens. With that in mind, Brady will sneak in the Kiriakis mansion to get rid of the attempted murder weapon.

Brady will do his best to lie his way out of this mess, but Eli and Lani will naturally be suspicious. They’ll think it looks like Brady’s doing exactly what he’s doing: trying to remove the evidence from the crime scene.

After Brady’s hauled down to the station, Kristen will realize the cops think he’s to blame. She’ll insist Brady couldn’t have stabbed Victor, so Eli will urge Kristen to elaborate on that.

Brady will pipe up with a confession to save Kristen, but this plan to take the rap isn’t going to work out as well as he hopes. For now, Brady will just claim he plunged the knife and hope to protect his love. He won’t think Kristen should go down for this since Victor pushed her over the edge.

Other Days spoilers say Gabi DiMera (Camila Banus) will lean on Will Horton (Chandler Massey) in her time of need. After Gabi confides that she saw Stefan DiMera’s (Brandon Barash) reflection, Will might argue that it’s common to feel like a dead loved one’s sending signs.

He’ll take Gabi’s hands and support her, but Gabi will still be pretty unsettled by all the Stefan reminders lately.

Of course, Ben Weston (Robert Scott Wilson) just got a giant Stefan reminder at the auto garage. When Ben arrived to ask about the available mechanic position, someone who looked just like Stefan emerged.

On Monday’s new DOOL episode, Jake Lambert (Brandon Barash) will introduce himself and suggest that Ben looks like he’s seen a ghost. That’s certainly what the experience will be like for Ben!

Days of Our Lives spoilers say Ben will celebrate his employment with Ciara Brady (Victoria Konefal) later this week, so it sounds like Jake will give him a chance. It should be fun to see Ben and Jake working at the garage together in the coming weeks. As for Ciara, she’ll get updates on Stefan and Jake’s eerie resemblance soon.

Back with Gabi, she’ll just miss seeing Jake in the town square. Days of Our Lives spoilers say Gabi’s first glimpse of Jake will have to wait until later this week! In the meantime, Abigail DiMera (Kate Mansi) will be in a frenzy after that bizarre hallucination of Ben.

Abigail turned to look at Chad DiMera (Billy Flynn), but instead she saw a warped vision of Ben glaring at her. Ben was wrapping a necktie around his hands and acting like he was going to make Abby his next strange victim.

It was a disturbing sight, but Abigail will eventually snap out of it. Once Abigail explains what she saw and gets assurance that it wasn’t there, Chad and Abby will both be worried. Abigail has hallucinated before and it didn’t turn out well for her.

Due to Abigail’s history of mental illness and all the troubles of the past, she’ll want to get checked out at the hospital soon. Abigail will know she needs to stay on top of this, but she doesn’t realize she’s been drugged! More answers are coming for Chad and Abby later, but Chad will just focus on comforting his wife for now.

We’ll deliver all the hottest DOOL news, so don’t forget to check back soon. Days spoilers say some twists and turns are looming in Salem. CDL’s your one-stop source for great Days of Our Lives spoilers, updates and news posts.