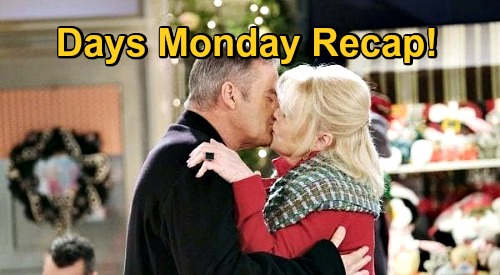 Brady revealed that Rachel Black (Emma, Kate, and Miller Kamienski) had a fever and couldn’t come, but he brought Kristen a handmade card from Rachel. Brady asked Kristen to imagine a special time in the future when they could enjoy Christmas together, and Kristen envisioned a comical scene.

After the daydream ended, Brady told Kristen that even though she wouldn’t be with him and Rachel tomorrow for Christmas Day, she would be in their hearts. Brady and Kristen vowed to someday be together as a family.

At the cemetery, Justin Kiriakis (Wally Kurth) brought flowers to Adrienne Kiriakis’ (Judi Evans) gravesite. Justin reminisced about when their boys were small, and he said that he missed them and that he missed Adrienne.

Justin sobbed, saying that Adrienne was the best part of him and always would be. “Merry Christmas, my love,” Justin said.

Justin then walked by the Brady Pub, where he encountered Bonnie Lockhart (Judi Evans). Justin asked how Bonnie’s date with her young stud went, and he called Bonnie out on trying to make him jealous.

Bonnie mentioned that Justin was back with Kayla Brady (Mary Beth Evans), and Justin revealed that he wasn’t back with Kayla. Bonnie was surprised, and she admitted to dating that young guy because she thought Justin and Kayla were back together.

Bonnie suggested that she and Justin have their date now, but Justin said that he was going to spend Christmas Eve with family. Bonnie’s face fell, and she went to leave, but Justin told her to wait, and he invited her to the Kiriakis mansion with him for the holiday.

Bonnie was hesitant, since his family detests her, but she agreed anyway.

Over at the Kiriakis mansion, Maggie asked Victor to wear a Santa hat, and Victor grumbled a bit, but he eventually agreed. Upstairs in Sarah Horton’s (Linsey Godfrey) room, Sarah talked with Xander via phone about how they had to be apart this Christmas, ending by saying that she loved him.

Suddenly, Sarah saw that Philip Kiriakis (Jay Kenneth Johnson) was standing in her doorway, and Sarah covered and said that she was talking to her sister Melissa Horton (Lisa Trusel).

Philip apologized for kissing Sarah before, but he admitted that he was attracted to her. Sarah maintained that she wasn’t ready to rush into anything.

In town square, Xander bumped into Chloe Lane (Nadia Bjorlin) and bantered for a bit about the whole El Fideo debacle in Mexico, when Xander handed Chloe over to the drug lord.

Xander thought they should put all that behind them, and he invited Chloe to join him for Christmas Eve at the Kiriakis mansion. Chloe thought that Victor would have a fit, but Xander urged Chloe to come, saying the Philip wouldn’t want her to be alone on Christmas.

Back at the Kiriakis mansion, Philip and Sarah joined Maggie and Victor in the living room, and soon Xander and Chloe walked in. Philip looked horrified, and Victor balked at Chloe being there.

Sarah felt obligated to play along with the ruse that she hates Xander, and she whipped out some mistletoe and held it above her head. Philip promptly kissed her, irritating Xander.

Xander then got some mistletoe of his own and held it over Chloe’s head, who promptly said that it wouldn’t happen. Soon, Xander and Sarah stole a moment, and Xander explained quietly that he wanted to bring Chloe to upset Philip.

Justin then entered the room and announced that he brought a guest. Bonnie rushed in, saying, “Merry Christmas, y’all!”

Victor got grumpy and demanded that Justin get “that woman” out of this house now. Justin sat down and explained that Bonnie deeply regretted what she did to Adrienne and that she donated all her earnings from her lawsuit to help women with breast cancer.

Victor seemed to be truly touched by this, and he invited Bonnie to stay. Maggie mused that Victor’s attitude must be due to the Santa hat.

Philip and Sarah stepped aside, and Philip mentioned their kiss earlier. Sarah mentioned that she saw the look on Philip’s face when Chloe walked in, and she noted that Philip clearly had feelings for Chloe.

Philip walked over to Chloe and shared a moment with her alone, as they reminisced about a Christmas poem that Philip wrote for Chloe when they were in high school.

“What we have is special,” Philip said. “I thought so, too,” Chloe said dryly. Across the room, Justin and Bonnie looked at ornaments on the tree and discussed missing their respective kids.

Bonnie mentioned Mimi Lockhart (Farah Fath), and Justin took Bonnie’s hand and said that Christmas was about the joy of being with the people you care about. Bonnie was touched.

Later, Chloe returned to her room at the Salem Inn, where she called to say goodnight to her son, who was in New York with her parents. Chloe’s mom Nancy Wesley (Patrika Darbo) asked Chloe to sing for her, and Chloe sang a beautiful rendition of Silent Night.

Back at the Kiriakis mansion, Philip wistfully picked up Chloe’s hat that she left behind, while Sarah returned to her room to find Xander waiting to give her a big kiss. And down in the living room, Maggie and Victor canoodled on the couch and declared their love for each other.

Finally, in town square, Bonnie and Justin strolled along. “I never imagined spending Christmas Eve with your family,” Bonnie mused. Justin then leaned in for a gentle kiss, taking Bonnie by surprise. Bonnie smiled happily.

There’s definitely a lot going on right now on Days of Our Lives, so stay tuned! Stick with the NBC soap and be sure to keep CDL bookmarked so you don’t miss any of the newest Days of Our Lives spoilers, daily episode recaps, and news.