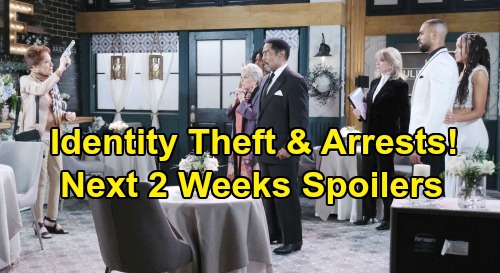 Days of Our Lives (DOOL) spoilers for the next two weeks tease that there’ll be a whole lot of wedding drama going on! During the week of June 29-July 3, Lani Price (Sal Stowers) and Eli Grant’s (Lamon Archey) nuptials will take a few wrong turns. For starters, Tamara Price (Marilyn McCook) will feel ill and eventually collapse on the floor.

Once Tamara awakens following this fainting spell, she’ll decide to head back to her hotel room. Tamara will think she should get some rest, so Lani will be hesitant to continue the wedding. She really wanted her mom to watch her tie the knot.

Nevertheless, Tamara will urge Lani to marry this wonderful man she loves so much. It’ll take some convincing, but Lani and Eli’s wedding will proceed as planned.

That is, of course, until Gabi Hernandez (Galen Gering) shows up! Days of Our Lives spoilers say Gabi’s very presence will cause chaos. Lani won’t want her enemy causing trouble at yet another wedding. Julie Williams (Susan Seaforth Hayes) will wholeheartedly agree, so she’ll toss Gabi right out of the building.

Then, Vivian Alamain (Louise Sorel) will march in with a gun and a score to settle! Days of Our Lives spoilers say Vivian will want to shoot Lani – just like Lani shot and killed Stefan DiMera (Brandon Barash). However, Lani will pipe up about her pregnancy and try to tug at Vivian’s heartstrings.

That won’t do the trick, but Rafe Hernandez’s (Galen Gering) updates will. Vivian will find out about Stefan’s lookalike, so she’ll be floored to learn that Stefan could actually be alive.

Jake Lambert (Brandon Barash) will also join Gabi at the hospital, where they’ll check out the DNA results and express their surprise. It sounds like a Jake-Stefan match is on the way.

Other DOOL spoilers say Allie Horton (Lindsay Arnold) will find herself in a tight spot. Will Horton (Chandler Massey) and Sonny Kiriakis (Freddie Smith) will ask Allie about adopting her baby, but she won’t look sold on the idea.

That’s mostly because Allie’s already thinking Rafe would be the perfect dad for her little one – and she’ll pitch the idea during the week ahead.

Will an Sonny are going to get some news that’s a real bummer soon. It doesn’t look like Allie will pick them as parents, but things could change eventually. Over with Ciara Brady (Victoria Konefal), she’ll select the perfect bridal gown – at least it’ll be perfect to Ciara.

When Ciara wants to know what Claire Brady (Olivia Claire Egan), Claire will prepare to be brutally honest.

Perhaps Claire will criticize the wedding dress and suggest another one only to get shot down. Days of Our Lives spoilers say Ciara’s gown will face some damage, which will leave Ciara and Ben Weston (Robert Scott Wilson) pointing the finger at Claire!

As for Brady Black (Eric Martsolf), he’ll meet up with Kristen DiMera (Stacy Haiduk) and decide to run away with her.

During the week of July 6-10, a crisis will hit on the morning of Kayla Brady’s (Mary Beth Evans) wedding. While Kayla tackles that, Victor Kiriakis (John Aniston) will rush to Xander Kiriakis’ (Paul Telfer) defense. Days spoilers say Victor will try to help Sarah Horton (Linsey Godfrey) appreciate that Xander isn’t such a bad guy.

Over with Steve Johnson (Stephen Nichols), he’ll make an announcement that crushes John Black (Drake Hogestyn). It turns out Steve will want to leave Salem, so John will bid farewell to best bud. Later, it seems Kayla will find out about Steve’s intentions and confront him before he has a chance to flee.

In the cemetery, Justin will reflect by Adrienne Kiriakis’ (Judi Evans) grave. After making a major confession to Kayla, Justin will head back to where Adrienne was laid to rest – or so he thinks! Is Adrienne actually alive?

Since Evans will likely reprise one of her rules in this cemetery scene, Justin will face a real shocker. Whether this is Adrienne or Bonnie Lockhart (Judi Evans), Justin’s bound to feel overwhelmed. Next, let’s talk about Vivian Alamain (Louise Sorel), who’ll hope Kate Roberts (Lauren Koslow) is willing to help her out with something.

Good luck with that, Viv! Days viewers know Vivian buried alive before she escaped Salem, so Kate may wonder why she should do Vivian any favors. Even so, Vivian could find a way to make it worth Kate’s while. Back with John and Marlena Evans (Deidre Hall), they’ll be blown away by Allie’s pregnancy news.

Next, Eli and Lani will dote on each other as they stay on newlywed cloud nine. As for Gabi, her fury will erupt over something she witnesses in Jake’s garage apartment. Gabi will walk in on something she considers to be awful, so that may be Jake and Gwen (Emily O’Brien) enjoying some bedroom fun.

Finally, Days spoilers say Claire will offer her help to Ben. There’ll be some pre-wedding task that Claire would be happy to take off Ben’s hands. Naturally, Ben will worry about giving Claire any extra responsibilities. The less Claire’s involved, the better – at least as far as Ben’s concerned.

The next two weeks will bring some terrific DOOL scenes, so stay tuned. CDL will have other entertaining Days of Our Lives spoilers, updates and news, so be sure to stop by frequently.